Start reading The Windsor Knot by SJ Bennett and enter to win!

The first book in a highly original and delightfully clever crime series in which Queen Elizabeth II secretly solves crimes while carrying out her royal duties. 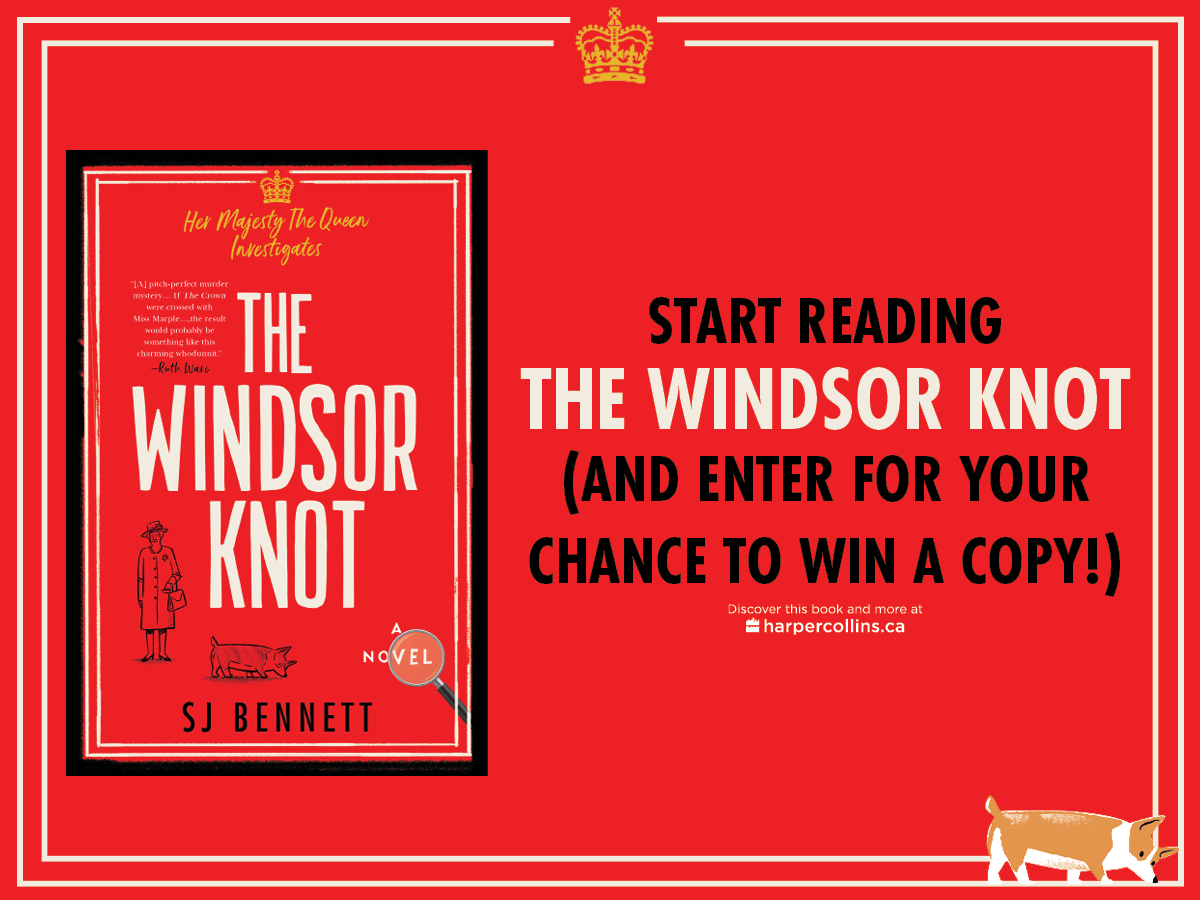 It was an almost perfect spring day.

The air was crisp and clear, the cornflower sky slashed with contrails. Ahead of her, above the treeline of Home Park, Windsor Castle glowed silver in the morning light. The Queen brought her pony to a standstill to admire the view. There is nothing as good for the soul as a sunny morning in the English countryside. After eighty-nine years, she still marvelled at God’s work. Or evolution’s, to be strictly accurate. But on a day like this, it was God who came to mind.

Of all her residences, if she had to pick a favourite, it would be this one. Not Buckingham Palace, which was like living in a gilded office block on a roundabout. Not Balmoral or Sandringham, though they were in her blood. Windsor was, quite simply, home. It was the seat of her happiest days of childhood: Royal Lodge, the pantomimes, the rides. It was where one still came at weekends to recover from the endless formality in town. It was where Papa was laid to rest, and darling Mummy too, and Margaret alongside them, though that had been tricky to arrange in the snug little vault.

If the revolution ever came, she mused, this was where she would ask to retire. Not that they’d let her. Revolutionaries would probably pack her off … Where? Out of the country? If so, she’d go to Virginia, called after her namesake, and home to Secretariat who won the Triple Crown in ’73. Actually, if it wasn’t for the Commonwealth, and poor Charles, and William and little George so nicely lined up to follow him after all the ghastliness, that wouldn’t be such a terrible prospect at all.

But Windsor would be best. One could bear anything here.

From this distance the castle looked untroubled, idle and half asleep. It wasn’t. Inside, five hundred people would be going about their business. It was a village, and a vastly efficient one at that. She liked to think of them all, from the Master of the Household checking the accounts, to the chambermaids making the beds after last night’s little soirée. But today there was shadow over everything.

A performer at the soirée had been found dead in his bed this morning. Apparently, he’d died in his sleep. She had met him. Briefly danced with him, in fact. A young Russian, brought in to play the piano. So gifted, so attractive. What a terrible loss for his family.

Overhead, a dull roar of engines drowned out the birdsong. From her saddle, the Queen heard a high-pitched whine and glanced up to see an Airbus A330 coming in to land. When one lives on a Heathrow flight path one becomes an expert plane-spotter, though knowing all the current passenger jets by silhouette alone was a reluctant party trick. The airplane noise jogged her out of her thoughts and reminded her she needed to get back to her papers.

First, she made a mental note to ask after the young man’s mother. She wasn’t, to be frank, normally that interested in the absent relations of other people. One’s own family was bad enough. But something told her this was different. There had been a very odd look on her Private Secretary’s face when he gave her the news this morning. Despite her staff’s endless endeavours to protect her from anything unfortunate, she always knew when something was up. And up, she suddenly realised, something most definitely was.

‘Walk on,’ she instructed her pony. Beside her, the Stud Groom silently urged on his horse in unison.

Under the ornate gothic ceiling of the small State Dining Room, breakfast was coming to an end. The Queen’s racing manager was sharing bacon and eggs with the Archbishop of Canterbury, the ex-Ambassador to Moscow and a few fellow stragglers from the night before.

‘Interesting evening,’ he said to the archbishop, who was seated to his left. ‘I didn’t know you danced the tango.’

‘Neither did I,’ groaned his companion. ‘Mrs Gostelow rather swept me off my feet. My calves are killing me.’ The archbishop lowered his voice. ‘Tell me, on a scale of one to ten, how ridiculous was I?’

The racing manager’s lips twitched. ‘To quote Nigel Tufnel, it was an eleven. I’m not entirely sure I’ve seen the Queen laugh harder.’

The archbishop frowned. ‘Tufnel? Was he here last night?’

The reluctant dancer grinned sheepishly. ‘Oh dear.’ He leaned forward to rub his lower leg under the table and caught the eye of the extremely beautiful, model-thin young woman sitting opposite him at the table. Her wide, dark irises seemed to stare into his very soul. She gave a faint smile. He blushed like a choirboy.

But Masha Peyrovskaya was looking through him, not at him. Last night had been the most intense experience of her life and she was still savouring every second of it.

‘Dine,’ she practised to herself in her head, ‘and Sleep. Dine and Sleep. Last week I went to a Dine and Sleep at Windsor Castle. Oh yes. With Her Majesty the Queen of England. You haven’t been to one? They are so lovely.’ As if it happened every week. ‘Yuri and I had rooms overlooking the town. Her Majesty uses the same soap as we do. She’s so funny when you get to know her. Her diamonds are to die for…’

Her husband Yuri Peyrovski was medicating an almighty hangover with a concoction of raw green vegetables and ginger made to his personal recipe. The staff were certainly efficient. Yuri had heard rumours the Queen kept her breakfast cereal in plastic containers (not that she was joining them this morning). He was expecting the old English ‘shabby chic’, which meant poorly-maintained homes with inadequate heating and peeling paint. But he had been misinformed. This room, for example, had elaborate red silk curtains, two dozen matching gilt chairs around the table, and a pristine carpet of bespoke design. Every other room was equally immaculate. Even his own butler would find little to fault here. The port last night had been excellent too. And the wine. And had there been brandy? He dimly remembered there had been.

Despite the pounding in his head, he turned to the woman on his left, who was the ex-ambassador’s wife, and asked how he might go about procuring the services of a personal librarian, such as the one they had met after dinner. The ex-ambassador’s wife, who didn’t know, but had lots of impecunious, well-read friends, turned up the charm to eleven and did her best.

They were interrupted by the sight of a tall, raven-haired woman in a pleated trouser suit, who appeared in the doorway stood in a dramatic pose, hand on hip, carmine lips pursed in alarm.

‘Not at all,’ the racing manager offered amicably, though she was, extremely. Many guests had already returned upstairs to oversee the packing of their overnight bags. ‘We’re all very relaxed here. Come and grab a seat next to me.’

Meredith Gostelow made her way to the chair being pulled back for her by a footman and nodded heartfelt assent to the suggestion of coffee.

‘Did you sleep well?’ asked a familiar voice to her right. It was Sir David Attenborough, as melodious and solicitous as he was on TV. It made her feel like an endangered panda.

‘Mmm, yes,’ she lied. She glanced around the table as she sat, caught sight of the beautiful Masha Peyrovskaya half-smiling at her, and almost missed her chair.

‘I didn’t sleep,’ Masha muttered huskily. Several heads swivelled to look at her, except her husband, who frowned into his juice. ‘I was thinking all night about the beauty, the music, the … “сказка” … How do you say in English?’

‘The fairy tale,’ the ambassador murmured from across the table, with a crack in his voice.

‘Yes, the fairy tale. Isn’t it? Just like being in Disney! But classy.’ She paused. This had not come out as she intended. Her English held her back, but she hoped her enthusiasm carried her through. ‘You are lucky.’ She turned to the racing manager. ‘You come here often, yes?’

He grinned, as if she had made a joke. ‘Absolutely.’

Before she could investigate the cause of his amusement, a new footman, resplendent in a red waistcoat and black tailcoat, walked up to her husband, bending to mutter something in his ear that Masha could not catch. Yuri flushed, pushed his chair back without a word and followed him out of the room.

Looking back, Masha blamed herself for mentioning fairy tales. Somehow, this was all her fault. Because when you consider them, fairy tales always have dark forces at their heart. Evil lurks where we most desire it not to be, and evil often wins. How stupid she had been to think of Disney, when instead she should have remembered Baba Yaga in the forest.

We are never safe. No matter how many furs and diamonds we wrap ourselves in. And one day I shall be old and all alone.

The Windsor Knot will be available in bookstores across Canada and online on March 9, 2021. Click the button to learn more.

Enter for your chance to win a copy of The Windsor Knot by SJ Bennett!

Excerpt from The Windsor Knot, Copyright © 2021 by SJ Bennett. All rights reserved.