Start reading The Replacement Wife by Darby Kane and enter to win!

A thrilling domestic suspense novel that asks, how many wives and girlfriends need to disappear before your family notices? 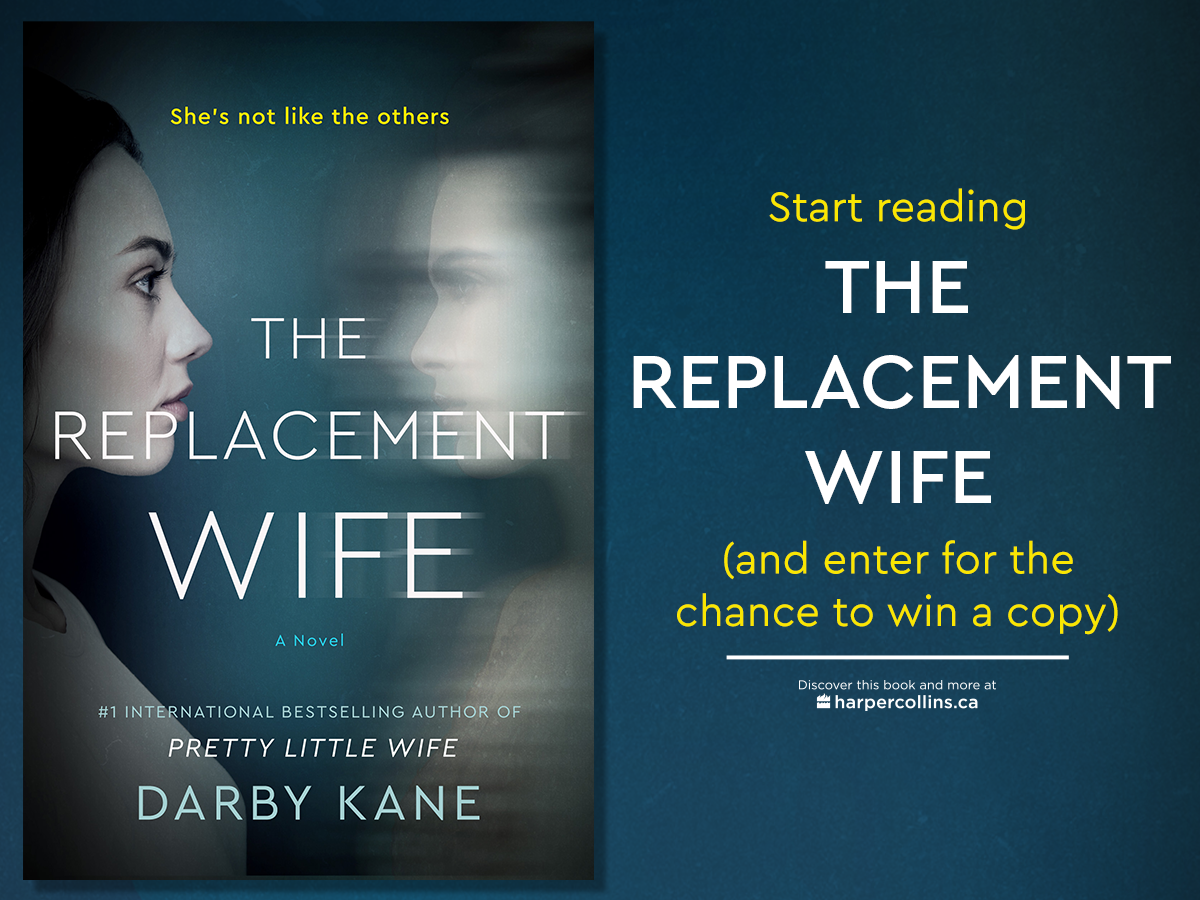 So much planning went into a scheme like this. It was all about matching the timing to the perfect set of circumstances. Once the details of how and when became clear, most of the other pieces would fall into place. The components mattered as much as the whole. Picking the right moment to move in. Not being too obvious or excited. Not giving anything away until the last second . . . then savoring the fear and panic.

Years, months, weeks. Those were timeline questions and not really relevant. The stinging attack would happen when it was supposed to happen. One little push and the plan would start rolling until it accelerated, racing down the right path, the one purposely set.

But, for now, it was a matter of knowing when to hold back and when to leap. Developing a stillness that let the body melt into place, blend into the background.
Now? Or what about now? Is it time yet? Satisfaction waited just out of reach. One stretch too far.

Unlike so many things that happened in life—buying a house, switching jobs—this was not the kind of thing to plot out with strict deadlines. But just winging it didn’t work either. In or out. Commit or don’t. Give into the need.

Another family dinner. This one on a random Thursday evening in mid-September. Same kitchen. Same table with the wobbly leg. Same people. One husband. One seven-year- old boy who hated anything that wasn’t a chicken nugget.

Not a that was a horrible accident type of killer either. No. A person who killed over and over, targeting and wiping out the women closest to him.

Elisa Wright looked across the table, over the pile of mashed potatoes and stack of homemade dinner rolls, at Josh. She couldn’t shake the now familiar anxious churning. With every forkful of food, every joke, every smile he gifted them, the word murderer flashed in her mind.

She closed her eyes but the bright kitchen lights wouldn’t blink out. The truth gnawed and pricked at her. Exploded in her head and shot through her while she assessed and dissected every word he said, looking for clues.

The big problem? She was the only who questioned him.

Everyone loved Josh. He was attractive, but not too much. Successful, but not too much. With brown eyes and brown hair that curled at the ends, he looked like an older version of that cute guy in your college history class who faded into memory long before he messaged you on social media two decades later with an overly familiar and slightly inappropriate greeting.

Charming, great at conversation, and really unlucky in love. The description fit Josh. That and, if her instincts were right, so did killer.

On the surface, he loved hard and grieved the loss of love even harder. He was not a guy who liked being alone. He craved stability and a relationship. He never gave off a playboy vibe. He’d spent most nights and weekends during the last seven months at their house, where Elisa fed and mothered him. Cleaned up after him and laughed with him.

Now, after years of knowing him, she feared him. Questioned every move and every explanation.

Josh knocked on the table right next to her hand. “Hey, sis.”

She jerked back at the mental interruption but didn’t say a word.

Nathan, secure in his place in the world and enraptured by his uncle’s antics, as usual, snorted. “She’s not really your sister.”

Fair because she’d considered Josh family from the day they met nine years ago. She’d been dating Harris, his brother, and heard all about Josh’s love of hiking and the years he spent spinning out of control. Harris basically raised Josh. Only seven years separated them, but the number didn’t reflect the reality of sleepless nights and rounds of money worries that had haunted Harris as he’d done all he could to save and support Josh all those years ago.

That made them close, more like father and son in some ways. The idea used to fill her with pride. She’d listened to the stories and could imagine her brilliant husband balancing his dreams and the hard work of veterinary school with raising a flailing brother still haunted by the unexpected loss of their parents.

She’d spent years admiring Harris for shouldering more than his share growing up. As an only child, she’d been more than a little envious of the brothers’ tight relationship. Now she wanted Josh out of her house. Out of their lives. Gone and forgotten.

She felt Harris’s fingers settle over hers. He rubbed his thumb along the back of her hand in that reassuring-husband way she loved. The gentle touch still had the power to calm the nerves jumping around inside her.

How did she tell him that his beloved baby brother scared the hell out of her?

She couldn’t and that problem created an unpassable divide between them. He hadn’t picked up on her pulling away, but she was and she couldn’t seem to stop it. She vowed to figure out a solution before her marriage imploded. She just needed time and evidence . . . and some sign that the husband she adored would believe her. That he’d take her side against blood.

The breath she’d been holding came out on a shaky exhale. She concentrated, trying to force a lightness she didn’t feel into her voice as she glanced at her son with an exaggerated eyebrow lift. “I’m cranky because someone woke up before six and wanted to play outside.”

“It was raining.” Nathan practically whined the response, as if any rational person would prefer splashing around in muddy driveway puddles to sleep.

“Interesting you didn’t know about the family’s early morning activities.” Josh put down his wineglass and reached for another dinner roll as he glanced at Harris. “Where were you?”

Mindless conversation. She could do this. “He was still asleep.”

“Story of your life. Right, Elisa?” Josh leaned in close to Nathan as if they were sharing an uncle-nephew joke.

She tried to keep her expression neutral but feared it came off more like a grimace. “Something like that.”

“Uh, nothing like that, actually,” Harris joked. He gave her hand a squeeze before picking up his fork and heading back in for another piece of steak.

When would this dinner from hell end? She couldn’t force down another bite. Hoping Josh would choke didn’t seem to be working either.

While she was forcing things, she forced a smile, this one for Harris. He was the hardest worker she knew. He’d built a practice and opened up not one but two locations of his emergency vet hospital in just a few years, way ahead of schedule.

It wasn’t Harris’s fault his brother was a psychopath.

“Okay, but . . .” Nathan stopped to chew and swallow when his father sent him that look. As soon as the chicken cleared his throat he was shifting around in his chair, practically bouncing with excitement. His gaze flipped to Josh. “Wanna watch a movie with me tomorrow night? Doolittle?”

“Again?” Harris cringed but Nathan was too busy staring at his uncle to notice.

No, no, no. She didn’t want Josh in her house, at her table, or near her son any more than necessary to keep family calm.

Before she could invent a lame excuse, Josh shook his head. “Any other time, yes, but I have to take a pass on tomorrow.” When Nathan’s face dropped, Josh squeezed his shoulder. “Later, during the weekend. Okay?”

“You’ll survive a Friday night with just your boring parents for company,” Harris said in his most convincing dad voice.

Nathan dropped one leg until his foot inched toward the floor, suggesting he was ready to move to the next thing on his agenda. “May I be excused?” he asked as he stared at his tablet on the kitchen counter. The one loaded with his video games he was allowed to play after dinner.

Harris nodded. “Take your plate to the sink and you can go.”

Nathan jumped down, dropping a nugget on the floor as he went. He whipped around his chair. Knocked into it. Basically made as much noise and as much of a scene as possible.

The Replacement Wife will be available in bookstores across Canada and online on December 28, 2021. Click the button to learn more.

Excerpt from The Replacement Wife, Copyright © 2021 by Darby Kane. All rights reserved.