Start reading The Listeners by Jordan Tannahill and enter to win!

The Listeners is a propulsive literary page-turner about a family torn apart by a mother’s obsession with a sound that no one else can hear. 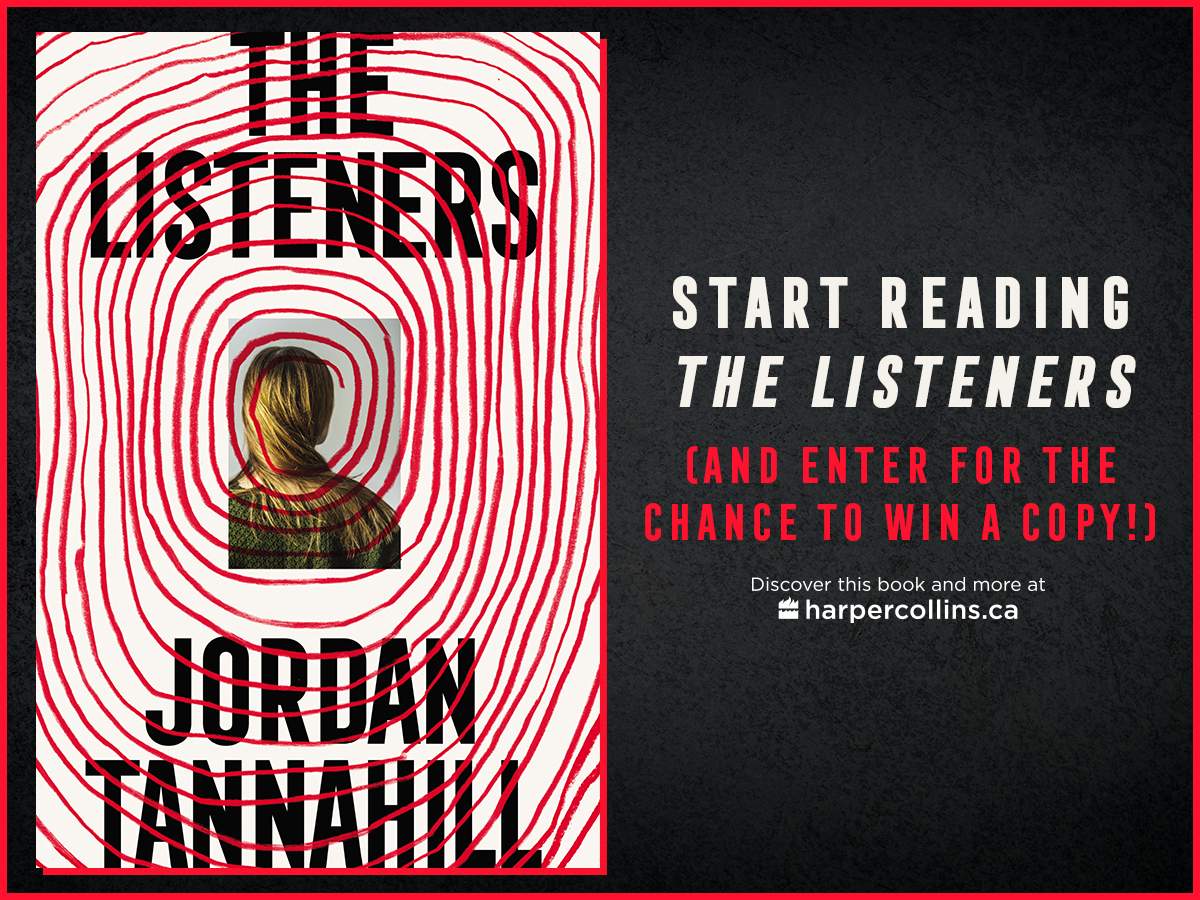 The chances are that you have, at some point, stumbled upon the viral meme of me screaming naked in front of a bank of news cameras; a moment of sheer abandon forever rendered as a GIF, pasted in comment threads and text messages the world over. The chances are that you have also seen the coverage of the tragic events that unfolded thereafter on Sequoia Crescent. And the chances are you probably think of me as some brainwashed cultist, or conspiracy theorist. I wouldn’t blame you for believing these things, or any of the other wildly sensationalized stories that have circulated in the days, weeks, and months since.

The truth is that I am a mother, and a wife, and a former high school English teacher who now teaches ESL night classes at the library near my house. I love my family fiercely. My daughter, Ashley, is the most important person in my life. You read about parents disowning their transgender sons, or refusing to speak to their daughters for marrying a Jew, or not marrying a Jew, and I think— well that’s just barbarism. Faith is basically a mental illness if it makes you do something so divorced from your natural instincts as a parent. I remember holding Ashley when she was about forty-five seconds old, before she had even opened her eyes, when she was just this slimy little mole-thing, nearly a month premature, and I remember thinking I would literally commit murder for this creature. As I held her I imagined all of the joy and pleasure she would feel, all of the pain that I would not and could not protect her from, and it completely overwhelmed me. I imagined the men who would hurt her one day, and I imagined castrating them one by one with my bare hands. All of this before she was a minute old! So no, I have never understood how anyone could ever put any creed or ideology before their love of their child—and yet, this is precisely what Ashley accused me of doing in the year leading up to the events on Sequoia Crescent.

I have attempted to recreate the events in this book as faithfully as my subjective experience of them will allow. I wrote these words myself. I did not have a ghost writer. I did not write this book to cash in on whatever minor and temporary notoriety I might have accrued, or to somehow exonerate myself. I wrote it as a way of making sense of my circumstances.

I have always turned to books for this. I’ve been a voracious reader since I was a girl. I was raised by a single mother and a television. There were no books in our apartment growing up, so I would take out as many as I was allowed from the library, and sometimes a few more which weren’t returned. I’ve always been drawn to stories of women pushed to the brink, living through extraordinary times, and enduring remarkable hardship. I have no time for stories about people mired in self-pity or self-destruction, who flounder around helplessly and hopelessly, I mean who cares, just get on with it. Even though my life really goes down the shitter in this one, I hope that you’ll take me at my word when I say that I truly fought every second of the way, and I did not, and still do not see myself as a victim. In fact, I’m sure many people see me as a villain in this story, but I try not to see myself as that either.

In high school, I was an aspiring essayist in the mould of Joan Didion. I had visions of postgraduate nomadism, smoking half a pack a day and driving my way across America, stumbling into the eye of the zeitgeist with my notebook and pen in hand. I used to wear a big army jacket with deep pockets stuffed with dog-eared copies of Rimbaud and Pound. All I wanted back then was to see my name in print. That was before I got pregnant at twenty-two, married Paul, and enrolled in teacher’s college. I never harboured regrets, though. I enjoyed being a young mom. When Ashley was growing up, we used to finish each other’s sentences. People would joke we were telepathic, and sometimes I half believed we were. I’d be thirsty and she’d bring me a glass of juice. Or I’d wake up knowing that she’d had a nightmare and walk into her bedroom before she even cried out for me.

All that to say, I never expected I would wind up writing a book after all these years, and certainly not under these circumstances. It just got to the point where I couldn’t bear to hear another person’s take on my story, another pundit or talk-show host weighing in on the events of Sequoia Crescent like they knew a damn thing about it, or making light of the tragedy for a late-night-show laugh. And trust me, I can take a joke. I’m sure I laughed harder than most of you at my frazzled hair and flopping boobs in that meme. But if you want to know the full truth, that requires digging deeper than an easy punchline.

The thing I still struggle to wrap my head around is how did something so small, so innocuous precipitate the complete unravelling of my life. How all of this soul-searching, transcendence, and devastation could begin with a low and barely perceptible sound.

Do you hear that?

I was lying beside Paul in bed. He was reading the New York Times on his tablet, and I was marking student essays on Twelfth Night.

Hear what? he asked, still reading his article.

I put the essay down on the comforter. It’s like a—humming, I said. Paul looked up, and we both listened for a moment.

The Listeners will be available in bookstores across Canada and online on August 17, 2021. Click the button to learn more.

Excerpt from The Listeners, Copyright © 2021 by Jordan Tannahill. All rights reserved.