Start reading The Berlin Girl by Mandy Robotham and enter to win!

From the bestselling author of The German Midwife comes the heart-wrenching story of a country on the brink of war, a woman who puts herself in the line of fire, and a world about to be forever changed. 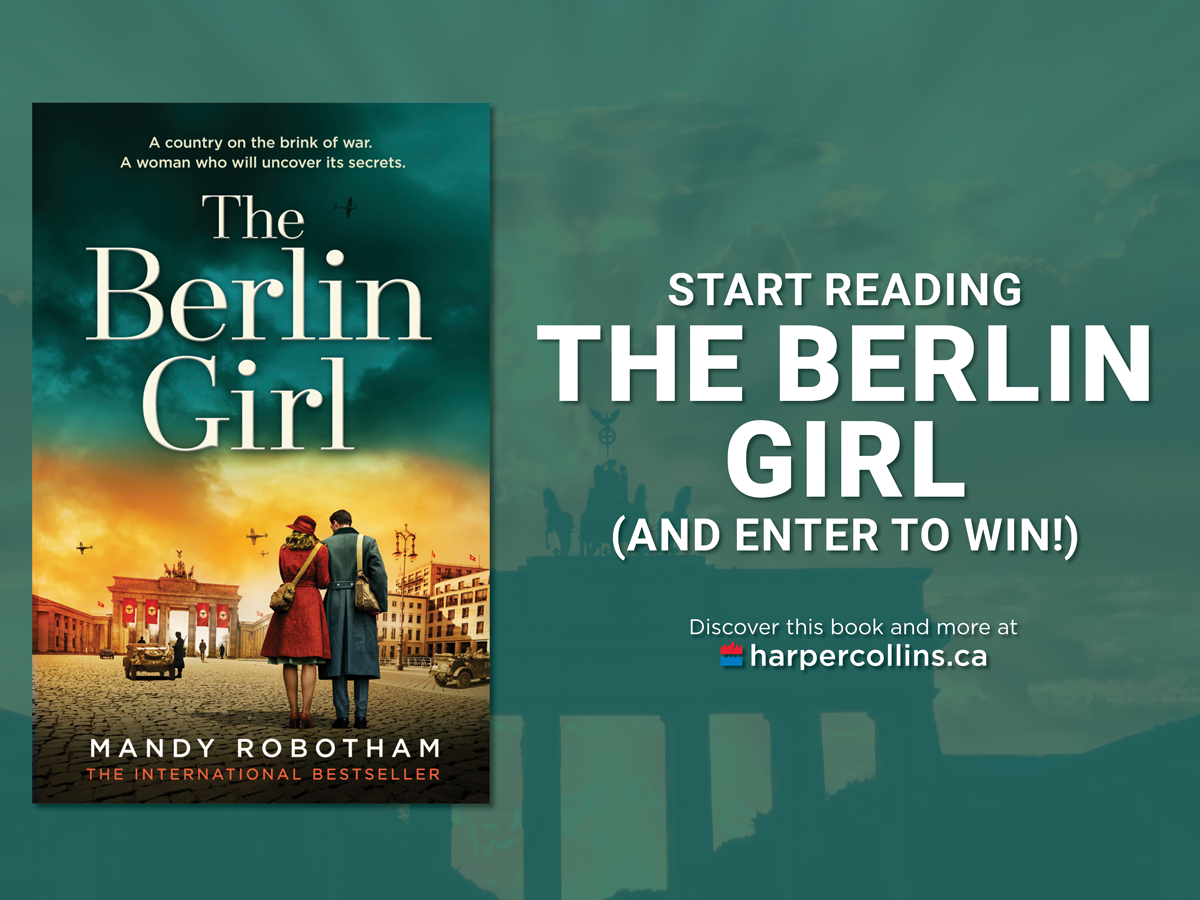 Leaving the clang of cell doors behind him and the ebbing sounds of agony within, Major Hugo Schenk holstered his pistol and climbed the stairs from the gloom of the basement with renewed energy.

As the light of the upper floors lifted his mood further, he spied the tiny crimson droplet out of the corner of his eye, unable to ignore it soiling the cuff of his otherwise spotless and pressed uniform. Despite its minuscule size, it moved like a virtual beacon in his line of vision. He scratched at it, irri-tation rising when it remained embedded in the fine, grey weave. These days, he rarely got his hands dirty, but today’s quarry for vital information had proved intensely frustrating – the target foolishly stubborn – and he’d acted in haste. Hence the spatter. He was relieved, though, to have left the majority of the red slick several floors down, a congealing pool across the filthy tiles of the cells. Doubtless, it was being mopped as he attended to his business above ground, its donor limp within the bowels of the building, unburdened of bodily fluid and what information he and his colleagues had managed to extract before his patience ran out. Even so, the tiny fleck sprayed upon him during the event was unfortunate, particularly as he had an appointment with Himmler later in the afternoon. Despite the day’s intense heat, the Gestapo chief would expect him in full uniform, collar and shirt tightly fastened.

Back at his desk, he looked with satisfaction at the neat stack of files to his side, meticulously categorised and all ready for Himmler’s approval. They were in size order; the fat folder labelled ‘Jew’ on the bottom, topped with ‘Romani’, ‘Sinti’ and ‘Jehovah’s Witness’. Uppermost sat a slimmer folder marked ‘Undesirables.’ With a self- satisfied nod, he scanned the full- scale plans for expansion spread across his desk – yes, much more capacity. More creativity. They were on target. Himmler would be pleased.

He scratched again at the blood spot as the phone trilled beside him.

‘Major Schenk, sorry to disturb you. But we’ve just had word on your attaché. I’m afraid to report he was killed this morning in a motoring accident. Both he and the woman in the car.’

The first emotion to rise was annoyance, sparked initially by that blood spot, but also by the inconvenience. Dammit, it was unfortunate to lose a good attaché, someone proficient at smoothing his sometimes rough edges, a worthy diplomat. He’d been efficient and obedient. A good Nazi. Schenk was aware, though, of the need to conjure up some semblance of sympathy. It wouldn’t do to appear callous.

‘Ah, that’s unfortunate. He had children, I believe. Do we know if they will be cared for by others in the family?’

The voice on the other end coughed with embarrassment. ‘Erm, the woman in the car wasn’t his wife, sir.’

‘Oh, I see. Well, send his wife condolences and flowers. And make sure we pay for the funeral.’

‘Have we got a replacement lined up?’

‘Yes, Major, I have someone in mind. Young, but very keen. I’ll sort the necessary paperwork; make sure you are able to meet him for approval.’

He replaced the receiver, and the red speck flashed across his vision, a spark to his temper within. Fucking Jews. Why did they have to bleed so copiously?

Georgie sat with her eyes fixed on the ceiling, tracking the light glinting off the chandelier and noting several cobwebs that hadn’t been dismissed by the cleaning staff prior to this evening’s ball. The glory of the London Ritz held fast in its reputation, but in its pockets and corners the infamous hotel might have been fading just a little – clearly dirt and dust soiled even the rich. And yet the thought made Georgie feel oddly comforted; if this glamorous venue – a place she could have only dreamt about in her childhood – was hiding behind a façade, then there must be others who sported such a veneer. Maybe even a good portion of this well- populated ballroom. It made her feel less of a fraud.

She shifted on her bar stool in an effort to bat away the waves of unending heat. The barman caught her eye and she smiled meekly, trying not to give the impression of being either stood up or lonely, when she was neither. Still, he looked back with sympathy. Others in the room might not have noticed Georgie’s awkwardness, the way the strap of her dress cut into her shoulder, lent to her by a cousin who was clearly half a size smaller. Or the shoes pinching at each little toe, biting into her flesh as she was forced to endure a dance with the office lothario and his two left feet.

She’d managed to excuse herself after one long and painful tune, retreating to the bar, where she now sat, nursing a Martini. The dance floor was full again, as correspondents mingled with reporters and photographers, watching editors and their wives twirling amid the heady table chatter of wordsmiths putting the world to rights. The summer media ball was where hard-ened London hacks let their hair down for just one night and forgot about the simmering rivalry of Fleet Street – who was first to the story, who bagged an exclusive, and who splashed the biggest headline. For Georgie it was intoxicating, though not nearly as effective as the very strong cocktail mixed by the barman who, in his pity, had added a second shot of vodka. The music and the heat were making her head swim, but she was enjoying the spectacle too much to leave.

‘Sitting this one out?’

Georgie swivelled her head in the direction of the voice, her short, blonde curls swaying with the sharp movement. For a brief second she wondered if it was the lothario come to hound her for a second dance, but the tone was unfamiliar. When her eyes fell on its owner, she noted there was barely a smile to accompany it.

She nodded at her feet perched on the bar stool. ‘I might be willing but my shoes are working against me.’

‘Oh,’ he said, and leaned his elbow on the bar, one flick of his finger signalling to the barman. Either her reply had come across as tart or he was simply making small talk, and Georgie returned to her people-watching.

Still, something about him forced a sideways glance; he was tall, lean and appeared surprisingly cool in his full evening suit. Noting her glimpse, he grasped at his own cocktail and turned to face her.

‘Are you here as a guest of someone?’ He clearly didn’t absorb the sharpness of his own tone. Any other woman might have supposed it rude, but it merely bounced off Georgie’s well- constructed shell. Does he think I’m an imposter, some kind of gate- crasher? she thought. Her irritation rose, and then fell as her sense of humour bubbled upwards. There was always fun to be had with such men.

‘Oh.’ More of an enquiring air this time. ‘Whose secretary are you?’

Georgie dragged a smile out of her deep and varied supply bag, the type of expression that hid her contempt well. ‘I work with Henry Peters.’

Whoever this young man was, he couldn’t fail to recognise the name of one of Fleet Street’s most revered men on the Chronicle’s foreign desk.

Is this his entire vocabulary? Georgie mused. He can’t possibly be a journalist, with such a poor grasp on language. ‘And you?’ she asked, eyeing her Martini as if it held more interest. She wasn’t in a mood to feed his ego, but the alcohol was making her playful.

‘I’m with the Telegraph,’ he shot back, turning and puffing out his chest. ‘Foreign desk.’ His voice was pure public school, his stature and dress reflecting the same.

‘Oh,’ Georgie responded. Two can play at that game.

They both looked out onto the dance floor again, the silence between them hovering like a thick winter fog.

‘Strange to see so many newspapermen with their wives,’ Georgie said at last, when the fog began to feel cloying. ‘I’ve never seen this many on their best behaviour. Or smiling.’ And she peered at him, assessing if he’d caught her humour. His gruff cough signalled not. Still, he didn’t seem inclined to walk away either.

‘Not tempted to tie the knot yourself?’ she pressed, noting the absence of a wedding ring. It was like prodding at a roasting spit of pork, and Georgie felt slightly guilty at how much she delighted in it.

He looked at her quizzically. ‘Me? Oh no,’ he said decisively. ‘I don’t know how any serious reporter could contemplate it. Not the way the world is right now. A foreign posting is no place for a wife. Or any woman, in fact.’ His hard, blue eyes relayed complete conviction in his statement.

‘Really?’ Now Georgie wanted to prod some more. With force. And a sharp object. ‘Are you not a fan of Martha Gellhorn then?’ she added.

‘You mean the future Mrs Hemingway?’ he shot back. His assumptive pairing would have been a red rag to the celebrated correspondent herself. Likewise to Georgie.

‘I feel sure Miss Gellhorn would take you to task for assuming she is writing in Ernest’s shadow,’ she fizzed through gritted teeth. ‘I’m inclined to think her dispatches from the Spanish frontline are just as good, if not better, than those of her lover.’

Now he looked at her again, his eyebrows knitting together in confusion. What on earth would a mere secretary know about that? they seemed to be saying.

‘Well, that’s a matter of opinion,’ he said at last. ‘It’s dangerous out there. You need your wits about you. And besides, marriage isn’t for me.’

‘Oh,’ Georgie said again. And she withdrew the toasting fork. He’s not worth the wit, she thought and turned her eyes to the dance floor again, transformed to a kaleidoscope of activity and colour, music flooding the entire room, the chandelier teardrops swaying from thermals of cigarette smoke and human heat.

He swigged suddenly at his cocktail, perhaps gaining courage from the action and the alcohol combined.

‘Care to dance?’ he said, and held out his hand for her acceptance.

Georgie gestured towards her feet and scrunched up her nose. ‘Thank you, but my feet are telling me it’s way too dangerous out there.’

Those very blue eyes bored into hers for a second. Realising he’d been snubbed, the man turned tail without a word, striding up to the first lone woman teetering on the edge of the floor and almost yanking her into the dancing fray.

Georgie drained her own glass and signalled for one more. Despite her sore toes and her undersized dress, it really had been a very entertaining evening.

The Berlin Girl will be available in bookstores across Canada and online on December 8, 2020. Click the button to learn more.

Enter to Win an Early Copy of The Berlin Girl by Mandy Robotham!

Excerpt from The Berlin Girl, Copyright © 2020 by Mandy Robotham. All rights reserved