Start reading No Place Like Home by by Linh Nguyễn and enter for the chance to win a copy!

Sweeping in scope and timeless in tone, No Place like Home is a middle-grade portal fantasy unlike any other. 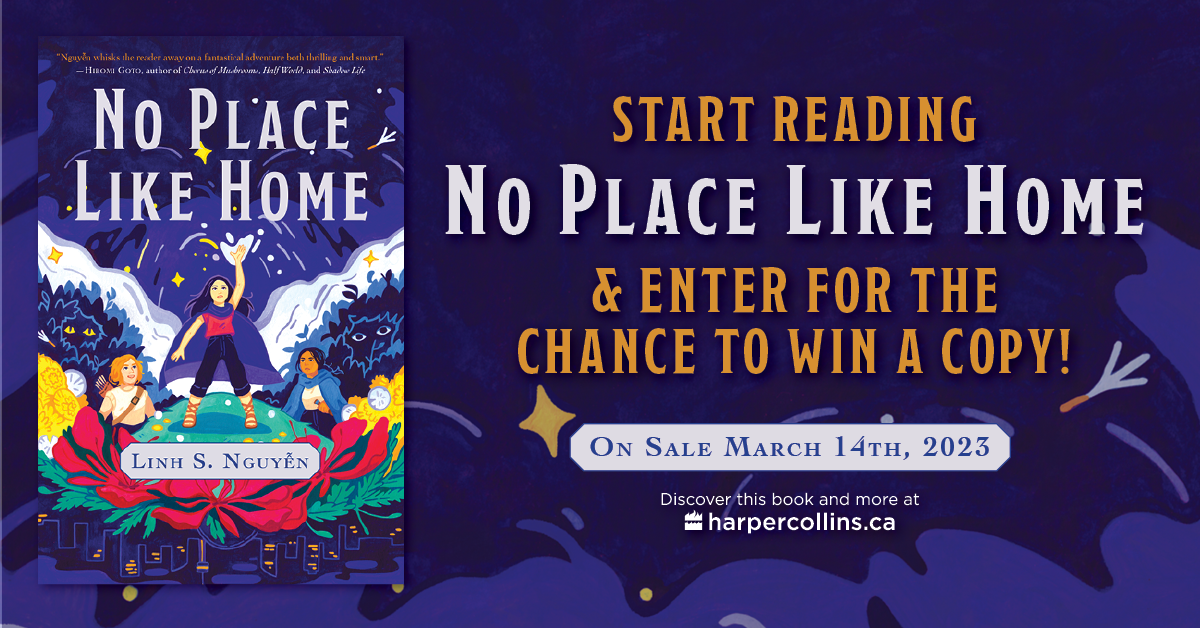 Her head clearing, Lan began to feel a pulse around them, like a heartbeat underlying this world. She stretched out her hands and felt invisible forces jump to them like magnets. She tried to grab hold but they eluded her, dancing out of reach. If she squinted closely, she could see hints of soft colours trailing the air.

“You feel it?” said Marlow, glancing sideways at her.

“Is that the residue stuff?”

“Yep. Leftover magic seeps out of any cast spell. That’s why it’s called residue. You know the whole energy-creates-more-energy idea? The more spells, the stronger the residue, the better the magic, and so on.”

“My world hasn’t got any of that,” said Lan.

“It must have some,” said Marlow. “Maybe not as much as Silva, but even here, it varies. Asta’s always buzzing, but the sky didn’t look like this when we got to the valley. This purple—that’s the magic that brought you here.”

“I made the sky purple?” Lan whispered.

“Careful,” said Annabelle, an edge creeping back into her voice.

Lan heard fear. “With magic, it’s easy to get carried away, especially starting out.”

“I’ll start small,” said Lan. She eagerly got to her knees. “Tell me what to do.”

“I told you,” said Annabelle. “I don’t do that magic stuff.”

“Some people are naturally more in tune with residue,” Marlow explained. “It’s never come easily to Annabelle or me. Never had a teacher to draw it out either. The middle of the desert isn’t where anyone goes if they’ve got a choice, so we didn’t have many witches flying around.”

“I am perfectly fine as I am,” Annabelle muttered.

“All right,” said Lan. “But you wanted food, right? I’ll start there.” Lan took a breath and reached in front of her, above a patch of flowers and grass. She hadn’t a clue how to begin. Everything she had done so far had simply spilled out, but Lan felt that unseen energy pooling around her hands, begging to be played with.

Mouth-watering dishes jumped to mind when she thought of food: smoked bún chả doused with fish sauce on the streets of her hometown, sweet-and-sour bún riêu with deep-fried tofu at the corner of her aunt’s house on Lạc Trung. But Lan could barely list the ingredients that went into them. A refreshing bubble tea would be welcome, but she had a feeling even that might be hard on first try. Tree guardians or not, Annabelle would definitely banish her if Lan drowned them in milk tea or made it rain tapioca. She’d be completely lost in this world without help. Even fresh fruit, like a handful of ruby-like pomegranate seeds, left her lost as to where to start. As Lan ran through the options silently, her mother’s voice came to her from a muggy balcony in Hà Nội two years back: Potatoes are the easiest things to grow.

That would do. Lan pictured a tuber rooting in the dirt, the plant breaking through the surface, leaves unfurling. She couldn’t help but feel silly. What if they were mistaken, and she wasn’t a witch after all? What if someone else had caused the storm and the dandelion was a fluke? Then, to Lan’s shock, dark leaves rose from the ground, followed by stems. Lan brushed aside the layer of dirt to find the vines entwining half a dozen purple potatoes. She cupped them in her hands in awe.

“Told you she was strong,” Marlow said. Lan glowed. Annabelle leaned over and plucked one off the roots, her face clouded. She turned it around her palms like she had never seen a potato before.

“I know what a potato is,” Annabelle said with an eye roll. But when she looked up, Lan caught a hint of gratitude in her brown eyes.

“Told you I could help.”

No Place Like Home will be available in bookstores across Canada and online on March 14, 2023.

Excerpt from No Place Like Home, Copyright © 2023 by Linh Nguyễn. All rights reserved.