Start reading Never Saw Me Coming by Vera Kurian and enter to win!

Never Saw Me Coming is a compulsive thriller that will keep you pinned to the page and rooting for a would-be killer. 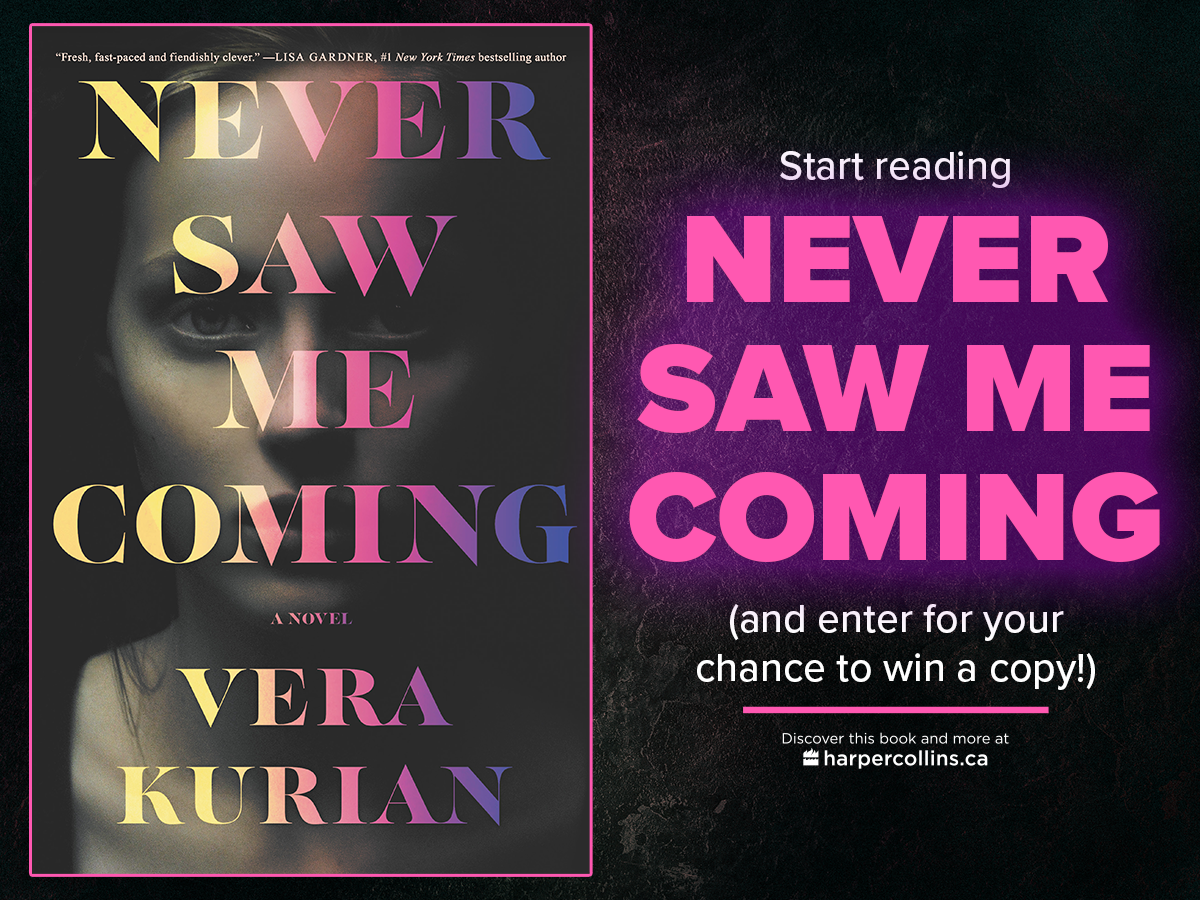 As soon as the door to my new dorm room closed, I went to the window, scanning across the quad for him. It wasn’t like there was any possibility he would just happen to be out there among the families lugging moving boxes or the handful of students sprawled in the grass.

But there—! A head of dirty blonde waves. Will. My mouth opened. Then the person turned and I saw it was only a girl with an unfortunate haircut. Seriously, you’d think she’d put in more of an effort for move-in day.

I turned and faced my empty dorm room with its sad linoleum floors, mentally going through my to-do list. 1. Get rid of Mom. Check. She had already left and was probably speeding up the I-95, popping open a bottle of champagne now that she was finally rid of me. 2. Claim the most advantageous space before my roommate Yessica arrived. 3. Make six to eight friends before 4. My mandatory check-in appointment at the psychology department. 5. Find Will.

We had a double with two bedrooms, one clearly larger than the other. While my normal instinct was to claim the larger one, I immediately saw the problem with that. The larger bedroom had windows that overlooked the quad. What if I wanted to crawl in or out of my window in the middle of the night­­­—? People will record anything even remotely interesting on their phones these days, and I could be easily seen from the other dorms and academic halls that lined the quad—too much of an audience for my liking.

I took the smaller room. My generosity would score me points with my new roomie, but more importantly, the room had a view of the brick wall of the building next to us and there was a metal fire escape attached directly to the window. Easy access in and out of my room without detection—perfect. I dumped some of my boxes into the room and made the bed, placing my stuffed plushie whale on top to clearly stake my claim. The voices inside the dorm were calling me and I had to establish myself quickly.

Brewser had one long hallway with rooms shooting off on either side. I peeked into the room next door where two brunettes were wrestling a duvet out of a plastic package. “Hi!” I chirped. “I’m Chloe!” I could be whatever they wanted me to be. A fun girl, a potential best friend, someone to tell secrets to over midnight snacks. This type of socializing was just me playing little roles for a few moments, but when I need to go all in, I can. I can make myself younger when I want to, opting for looser clothes that hide my body and making my eyes shiny with dumbness—a whole costume of innocence. I can look older with makeup and carefully selected clothes, showing skin when necessary. It’s easy because people tend to see what they want to.

I went door to door. Room 202. “Ohmygod I love your hair,” I said to a bubbly blonde I suspect will end up popular.

Room 206. “You’re not brothers are you?”  I said shyly to two boys on the crew team (nice bodies but baby faces—not my taste). They grinned at me, looked at my boobs, and each vied to say something clever. Neither was clever.

Room 212 was a pair of awkward girls. I was friendly to them but didn’t linger long because I knew they would never be key players.

While I met a few more people, I was simultaneously assessing who seemed like they were going to be part of Greek life. Will was in a frat, SAE, and one of my first orders of business was to get in with that frat. The crew boys were already in the hallway loudly talking about going out to a club that night. That was good—an outing, and the crew boys seemed like they would be the type to pledge a frat. “I love dancing,” I said to what’s-his-name, the taller of the two, fingering the end of my braid. “It’s the best way to get to know people.” He smiled down at me, his eyes crinkling. If high school taught me anything, it’s that social life is a game that revolves around navigating hierarchies. Be someone guys want to fuck or you will be invisible to them. Be someone the girls want firmly tucked into their inner circles, whether as friend or enemy, or die the death of being totally irrelevant.

Even from our brief interactions, I could tell no one in this dorm was in my program.  I’ve never met someone like me, but when I do, eventually, I think it will be like two wolves meeting in the night, sniffing and recognizing a fellow hunter. But I doubt they would put two of us in the same dorm—there were only seven and they probably had to spread us out to prevent a war from breaking out.

I had to go then, leaving my new friends behind, to check in with the program.

Never Saw Me Coming will be available in bookstores across Canada and online on September 7, 2021. Click the button to learn more.

Excerpt from Never Saw Me Coming, Copyright © 2021 by Vera Kurian. All rights reserved.