Check out this new domestic thriller about an obsessive relationship between a nanny and her former charge. 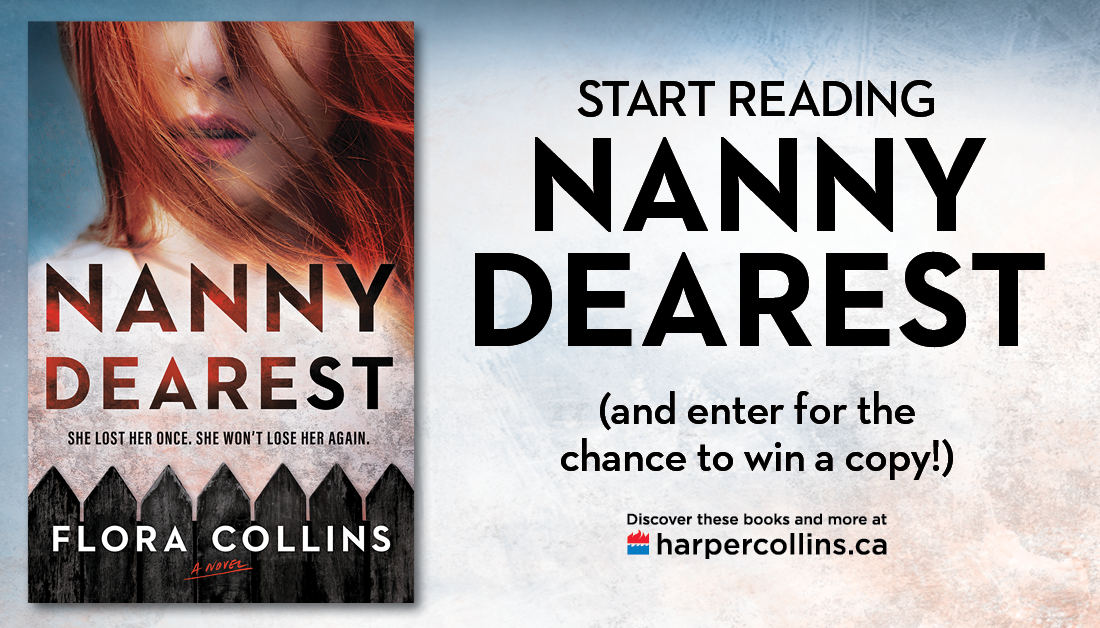 The house is massive. Just staring at it, she already feels lost.

She knew the family was rich, their house tucked into what used to be farmland so the husband could focus on his writing. Behind the house is a lake. It snakes through to her part of town—she’d capture frogs there as a child, wading into the swampy parts of the water. Once she brought one home, plopped into an old tomato sauce jar, and upon seeing his little girl clutching the jar so gingerly, her dad plunged his fleshy fingers into the container and grabbed the frog by its bulbous neck. Its eyes bulged so big she was sure they’d roll out. But instead, in what he described as a science experiment, a homespun biology class frog dissection, he cut its throat with a steak knife, made her watch the creature’s green-tinted blood spurting out, dribbling down the wall.

She didn’t bring home another animal after that.

She reaches the front porch of this mammoth house, with upholstered chairs, a swing. A tiny spider scurries its way up a rail, disappearing into a crevice in the freshly painted wood. She knocks on the front door.

There’s silence and she knocks again, louder this time, using the heel of her hand. And finally she hears shuffling, a grunt as a jammed doorknob is turned. And then she is standing in front of a tall, slim man, checkered shirt tucked into slacks, glasses perched at the end of his nose. He looks far too old to have a daughter so young. It’s bizarre to see him in real life, as if he’s walked out of the jacket flap of one of his novels. He’s narrower than his picture, the real world diminishing him into a regular middle-aged man.

“You must be Annie,” he says, and sticks out his hand. His fingernails are finely cut, his cuticles scrubbed, like a woman’s. She takes it, after a pregnant pause.

“Yes, yes I am.” She looks up into his milky blue eyes and he smiles nonchalantly, like she could be anyone. But she’s used to that.

“I’m Mr. Keller, as you may have gathered. Come on in. You can wait in the living room and I’ll get my wife.” The front hall is bigger than her childhood home, empty except for one round, gleaming table showcasing a bouquet of sky-blue hydrangeas in an enormous cut-glass vase. The walls are lacquered in a deeper shade of the same blue, and the old parquet floor is so polished Annie can practically see her reflection in the planks. It’s so quiet, she finds herself tiptoeing, her soles flexing, so as not to make a sound.

He leads her to a room filled with color, orange couches, blue vases on the fireplace mantel. Lemony sunlight glows on the dark, reflective end tables, and the back wall is lined with books organized by color. Silver-framed photos on one table show the Kellers with some famous people—the mayor of New York City and others Annie isn’t sure she recognizes. The Sony Trinitron TV is half-concealed inside a massive cabinet stenciled with a curling pattern of vines and grape clusters.

She’s never seen anything like it, her mouth parting in awe as she imbibes the whole room. Who knew you could make a home so beautiful?

The man stands awkwardly by the entrance, staring at her staring. “I’m glad we have somebody around to admire it. We haven’t had guests yet.” He smiles at her and this time it’s genuine, his eyes crinkling. She smiles shyly back.

“Belle, the nanny’s here,” he calls into the cavernous space. When no one comes, he turns to Annie and holds up a finger. “One sec. Make yourself comfortable.” She perches herself on the edge of the sofa, placing her hands on her knees, prim and proper like she imagines you’re supposed to do in houses like this.

And then a woman comes in, her jeans dirty, peeling off gardening gloves and tossing them on a pristine mirrored table. It makes Annie wince.

She’s blonde and tiny, also older than Annie expected, five feet even, in socks. When Annie stands to introduce herself, she towers over her. But she’s one of those people who seems tall. Unlike the husband, she’s all business. No smiles, no niceties. Just a cursory glance, a hand extended. “Sorry, I was out back gardening. I didn’t hear you arrive.” She doesn’t sound apologetic. “Susanna is two and a half, almost three. So basically we’re looking for a nanny, every day nine to seven. I’ll be gone most days—either in the city or at this office space I’ve rented in town. Claudette said you have your associate’s in early childhood education?” She sits, taps her fingernails on her arm, waiting for Annie to begin.

“Yes I got my GED at seventeen and then did that program. And I basically raised my siblings, too. I’m one of five and Mom died when I was twelve, so since then, they’ve mostly been my responsibility.” Mrs. Keller’s eyes widen at that, her tongue clucking with pity. “I’m certified in CPR, first aid, and water safety.” Annie settles on the sofa again and takes the certificates out of the dog-eared folder, laying them gently on the table, smoothing out their edges. “I can clean on the days Claudette is off. And I can cook, too, if you ever want a break from the kitchen.” She smiles softly at Mrs. Keller, who snorts.

“Oh trust me, I don’t cook. But it’s good to know that you do.” And the interview continues, Annie marveling at that brilliant room, grinning with no teeth. She doesn’t want them to notice how crooked they are. It wouldn’t fit here, in this gorgeous, orderly space.

Finally, Mrs. Keller turns to her husband. “To be honest, it seems impossible to find anyone reliable in the sticks, and I really need to get out of this godforsaken house some more, so if it’s up to me, you’re hired. What do you think, babe?” And it’s like Annie is out of the room. She shifts her gaze to the floor, the carpet a mesh of pinks and oranges, swirling together in a kaleidoscopic pattern.

“I think it’ll be perfect. She’s young enough that she’ll keep up with Sue’s energy.”

Mrs. Keller nods, cracking her knuckles. “Yeah, your old girl isn’t who she used to be.”

This time Mr. Keller snorts, before turning back to Annie. “I’ll be home almost every day, up in my office, writing.”

“But only holler if you really, really need anything. He needs to finish this series so we can move back to the city quicker.” She shakes her head. “I’m sorry, that’s probably offensive. You grew up here.”

Annie forces herself to laugh, a tickle at the back of her throat. “No problem.” Because what else is she supposed to say?

“You know, let’s introduce her to Suzy, see how they get along,” Mr. Keller says. “You’re okay with that, Annie? She really should be the deciding factor here. Her nap time is about over now, anyway. I’ll go up and get her.” He doesn’t wait for a response. Annie hears him climbing the stairs.

Mrs. Keller reaches into her pocket and lights a cigarette, exhaling in Annie’s direction. “You be good to my girl, okay? I didn’t expect her to happen. I was suddenly pregnant at forty-three. Forty-three! Can you imagine? I had no clue what to do with myself. But once you have a child of your own, you’ll see. It changes you. Love doesn’t even begin to explain it.” She puffs on her cigarette, ashing it in an elegant white tray shaped like a scallop shell. Annie has to keep from grimacing. No object that nice should suffer such an indignity.

When they hear Mr. Keller coming down the stairs again, she drops the whole thing, crushing the butt with her finger, smearing cinder all across that fine white china.

Then Mr. Keller steps in holding a doll.

That’s truly what Annie thinks for a split second as he comes in and settles down in a chair, the doll still in his lap. She’s the most beautiful child Annie has ever seen, like out of the fairy-tale book she cherished as a kid, filled with golden hues and turquoise skies. Rosy-cheeked, lips moist and full, eyes big and blue and unblinking. Blond hair cascades down her shoulders, almost white, especially in the afternoon light.

She’s nothing like Annie’s own siblings, scabby-kneed with brutal grimaces, dirt under their fingernails, their father’s face etched into each of their features. She’s delicate, elegant even, a child from a world far different from Annie’s. She wants to hold her, to nuzzle her neck and braid her hair, handle her even more preciously than she did the beloved Barbie given by her grandma on her fifth Christmas.

She just plain wants her, can feel the intangible cord of their shared soul loosening as they move nearer to one another. This is it. This is all she needs. Annie is stronger now. Nothing and no one will be lost.

And it’s like she can hear Annie’s thoughts, this perfect child, because she reaches her arms out. “You wanna say hi to Annie, don’t you?” Mr. Keller coos, and Sue toddles over and climbs into Annie’s lap without another word, resting her head against Annie’s breast and sticking her thumb into her mouth. Annie wraps her arms around the little body, the warmth penetrating her chest.

“My God, she likes you more than me.” Mrs. Keller laughs. But it’s a dry, mirthless sound.

“I’m shocked.” Mr. Keller raises his eyebrows, stroking his chin. “It’s like she already knows you.” And Annie smiles because that’s exactly what it’s like. The little girl reaches up and tugs at Annie’s curls. “Pretty,” she says, wrapping her tiny finger around a ringlet, giggling as it bounces.

Mrs. Keller was right. Love doesn’t even begin to encompass these feelings.

Nanny Dearest will be available in bookstores across Canada and online on November 30th, 2021. Click the button to learn more.