Start reading Hold My Girl by Charlene Carr and enter to win!

For fans of Jodi Picoult, Kate Hewitt and Ashley Audrain, a heart-wrenching novel about two women whose eggs are switched during IVF. 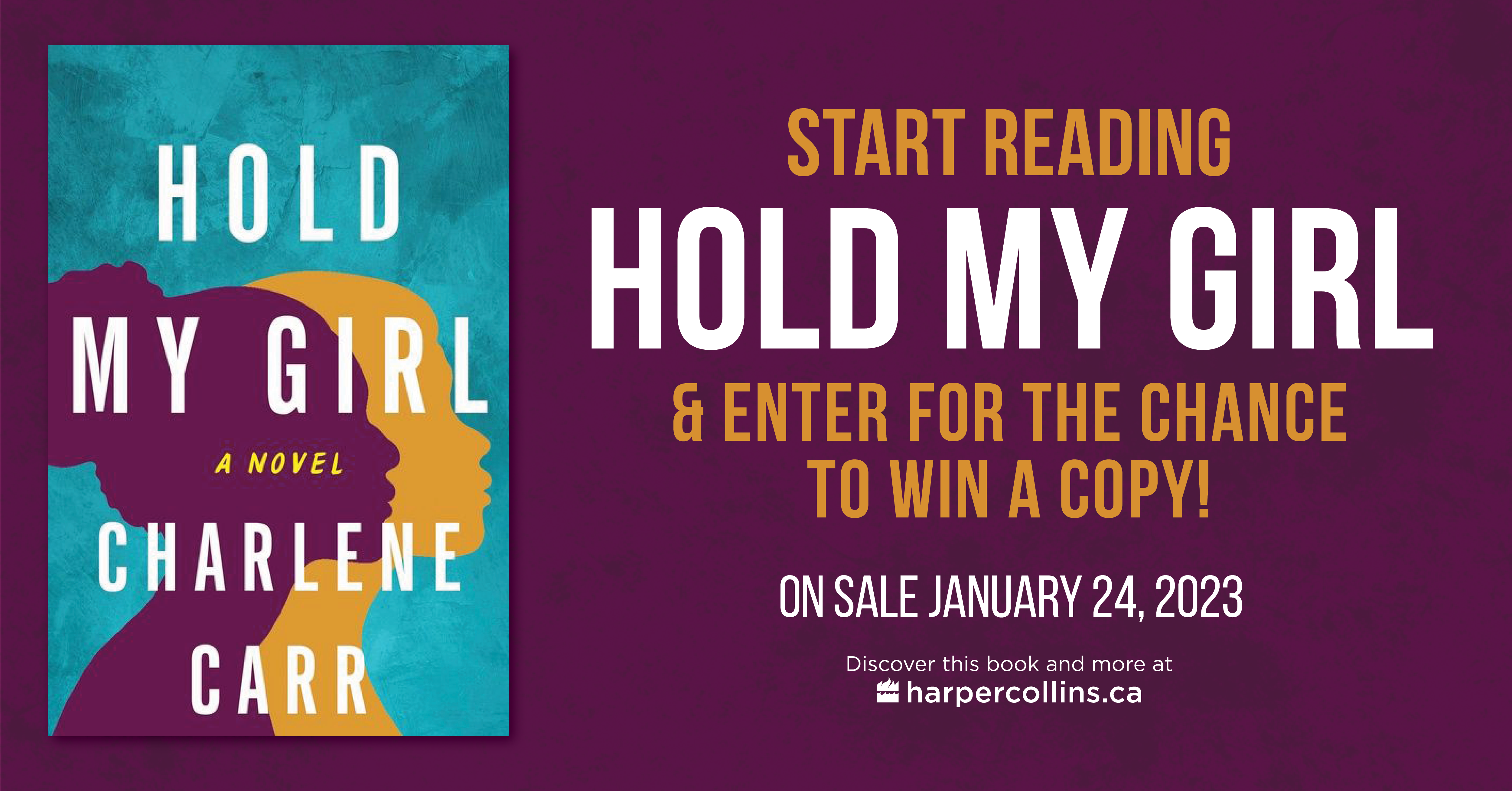 She couldn’t think about the voicemail. Katherine inhaled sharply. The muscles in her neck clenched. She took another deep breath, willing herself to relax. She wouldn’t think about it. Not today. Instead, she thought of Patrick. Patrick, who managed to get to work on time, who kept perfect records for his clients, who never forgot a friend’s birthday but could not, no matter how much she emphasized the importance of it, put the keys in the bowl by the front door.

Katherine stood, let out another exhalation, and replaced the cushions, pushing them tight, so the edges lay flush. She propped her hands on her hips and surveyed the room. This exquisite room in this stunning house Patrick had provided for her.

She hadn’t worked full time in over two years, and he’d been fine with it. Better than fine. She hadn’t worked at all since Rose was born—almost a year now of putting her interior design business on hold. When she’d brought it up, asked if he thought it was time to start working again, Patrick, with his kind eyes, told her she worked plenty. She took care of him, Rose, the house. It was enough.

So maybe Patrick forgetting to put the keys in a practical place wasn’t such a big deal. Maybe she should stop mentally lecturing him, preparing the argument—sharp enough to make an impression, but not so sharp to create an uncomfortable distance between them—for when he came home that night.

But he was making her late, and Katherine Matheson was never late.

Katherine clenched her jaw, fighting not to let frustration get the best of her. She’d told Saadia she’d be at the party 15 minutes early to help set up, which was five minutes ago. And now, if she wasn’t in the car in precisely four minutes, she’d be late for the start, even if she caught every green light. Which meant she was already late, because how likely was that?

Katherine picked up her phone and clicked on Patrick’s picture. She paused. If she talked to him, asked where the keys were, he’d ask how her day was going, and what would she say? She’d received a phone call from the fertility clinic. A strange message, ‘a rather serious issue regarding their IVF procedure,’ and she hadn’t called back.

Telling him would put voice to the fear she’d lived with for almost a year—that Rose wasn’t hers. Katherine was light-skinned for a Black woman, even a mixed-race one, but Rose, as a newborn, was so white she made Patrick’s cream-coloured skin look tan. Her hair was fine and straight and almost blond. Her eyes a bluish-green, which was possible. Patrick had blue eyes, and Katherine’s aunt on her mother’s side had a hint of green.

They’d joked about it in the beginning, Katherine forcing a smile. To her, it had never been a joke.

Katherine closed her eyes, swallowed. The call, whatever the doctor had to say, would be nothing, of course. A formality. Maybe someone’s life was about to irrevocably change, but it wouldn’t be hers.

Katherine spun. A laugh burst out at the sight of her baby on the floor, the little miracle she’d nearly given up hope of having. Rose’s sweet chubby legs splayed in front of her, a grin on her face, and the keys held high in her hand, shaking them like a rattle. “You little scamp!”

Katherine dropped the phone in her bag, then stepped toward her daughter. She scooped Rose and the keys into her arms and smothered the girl with kisses, her stress easing at the sound of Rose’s laughter. She wouldn’t be early, but if she were lucky, she wouldn’t be drastically late.

Katherine pulled into the last spot at Natural Ways Wellness Centre, the site of her first job when she’d branched out on her own, starting KM Interior Designs. Ten minutes late. It was fine. The five red lights and construction hold up weren’t the end of the world.

Still, she’d wanted to be early. Saadia was Katherine’s most loyal client. Each time Saadia expanded to another section of the building, growing the centre from a two-room acupuncture and naturopathy operation to buying out the whole space to accommodate another acupuncturist, an osteopath, two massage therapists and a pelvic floor physiotherapist, she’d called Katherine for the redesign, and Katherine had come.

Today was a chance for Saadia to celebrate ten years in business, to show the world, and her family, all she’d accomplished. The media would be there. Past and potential future clients would be there. Saadia’s father, who’d written Saadia off as nothing more than a snake-oil salesman, would be there.

Although her demeanour and outlook on life was a little more New Age than Katherine originally expected of a serious business-person, Saadia Medina was no snake-oil salesman. Katherine, who not too long ago would have nodded her head along with Mr. Medina’s dismissal of a career in naturopathy and acupuncture, was now a believer. After charting her basal body temperature, tracking her cervical mucous, multiple IUIs, and two rounds of IVF, with all the accompanying drugs and injections, it wasn’t until Katherine stopped interacting with Saadia as her client and became her patient that, on her third round of IVF, she’d gotten pregnant with Rose.

So, for Saadia, Katherine wanted this day to be perfect. She sighed as she turned off the car and unbuckled her seatbelt. Even if the day wasn’t perfect, it’d be perfect enough. The words were Patrick’s; a phrase he hauled out when overwhelm flooded Katherine—fear that something would not go exactly as she’d planned. A phrase Saadia would echo.

Katherine glanced into the overhead mirror, adjusting her curls, checking for any smudges of mascara, then stepped out of the car. She lowered her shoulders, relaxed her jaw. A smile played across her lips as she unfastened Rose’s car seat, took in her girl’s pink cheeks and bright eyes. Saadia wouldn’t be stressed. As the most easy-going person Katherine knew, she wouldn’t be worried or annoyed either. She’d laugh about Patrick forgetting to put the keys in the bowl, yet again, place her hand on Katherine’s arm and say, with that calming voice and that calming smile, ‘Katherine, he's not you.’

Katherine pulled Rose into her arms and turned toward the centre, determined to have a good time… if only she could stop thinking about that voicemail.

Hold My Girl will be available in bookstores across Canada and online on January 24, 2023. Click the button to learn more.

Excerpt from Hold My Girl, Copyright © 2023 by Charlene Carr. All rights reserved.