Start Reading Good Husbands, a shocking novel about three wives, one letter, and an explosive secret that will change everything. 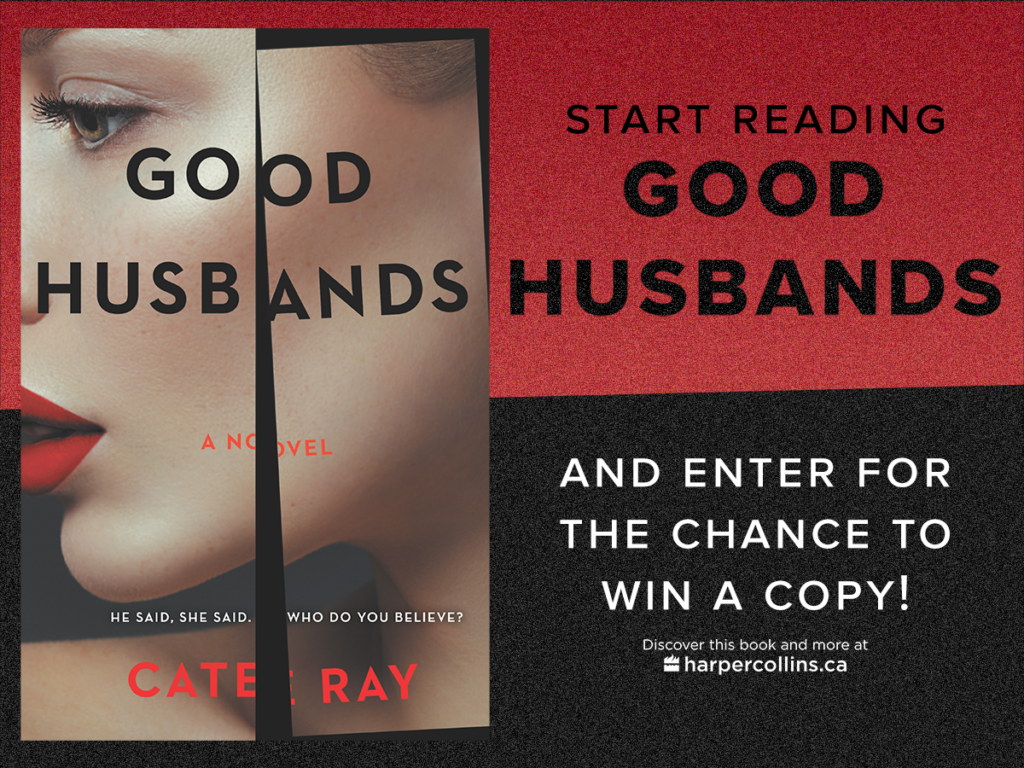 I’m one hundred percent average, said no one ever. Yet that’s what most of us are, myself included. I know the sum of my parts and it equals ordinary and there’s no shame in that. In fact, it’s a strength. My parents were ordinary too and as their only child they raised me to respect being a leaf on a tree, a grain of sand on the beach. You get the picture. But it doesn’t mean being insignificant, anonymous. It means being part of a community, a tribe, a cause greater than yourself.

I realise this kind of thinking isn’t very now. The idea of being average scares my girls to death. I wouldn’t accuse them of it outright, yet it’s probably in their DNA too and at some point, they’ll have to confront it. Mediocrity isn’t something they can deal with and perhaps that’s where we’re going wrong because ordinary is what gets you through. Ordinary is noble, life-affirming. It’s the heart of humanity and somehow, we’ve forgotten that.

And then the letter arrives and I know as soon as I read it that I’m going to have to re-think everything. Because I’m fairly sure that ordinary people don’t get letters like this.

It’s the first day of autumn and I don’t know if it’s actually colder or whether I’m imagining it, as though a door closed yesterday on summer and a chillier one opened, but I’m definitely feeling it today. The tip of my nose is icy and I would get a hot water bottle for my lap, only I’m leaving the house in twenty minutes.

I’m meeting Duane Dee, my favourite sculptor – the only sculptor – on my client list and anything could happen. You never know what you’re going to get with artists, which is why I like working with them. They’re up and down but more than that, they’re honest. I’ve never known a profession like it. My artists talk about integrity and authenticity all the time and I lap it up. I love that the men don’t shave for meetings, the women don’t dye their greys, no one bothers ironing anything.

The investors are another sort altogether. People who buy and sell art are very different from those who create it. I know whose company I prefer, but I keep that to myself because even I know not to bite the hand that feeds me.

Max thinks it’s funny that I work for Moon & Co – he calls them the Moonies – even though he was the one who got me the job. He knows everyone in Bath because he grew up here, whereas I’m originally from the East End, London. I’ve been living here for twenty years and it still makes me laugh that locals think it’s urban, even though I can see cows from our bathroom window.

I’ve just got enough time for a quick look at Facebook. I don’t know why I do it to myself, but sometimes I feel that if I don’t keep up, I’ll be left behind. Which is odd because it’s not as if it’s a race, is it, being human?

I’m forty-six years old and still looking for friends. I’m pretty sure I won’t find them here in this endless scroll of happy images. People work so hard to make themselves look perfect, it’s hard not to try to find faults. I don’t enjoy it. It makes me feel bitchy but still I return and peek.

I glance at the time: ten minutes until I have to go. Outside, red leaves are hanging on the trees as though they’ve gone rusty and can’t move. There’s no wind today, the air completely still.

Duane Dee doesn’t use social media.  He thinks the tech companies are using us to get rich and that it’s odd I’m willing to be a pawn in Silicon Valley because I strike him as militant.

It’s probably because I still have a slight East End accent, which can sound blunt, tough, but I like to think of it more as plain-talking. My late Dad used to say that the EastEnders wore their hearts of gold on their sleeves. A firefighter all his life, he believed in helping people out, especially along our street of identical terrace houses where no one could set themselves apart.

Enough of Facebook. I shut it down, telling it I won’t be back, knowing I will. And then I gather my things, ready to take off.

In the hallway, I sit on the stairs to put on my trainers, wondering when I started dressing like a teenager, and that’s when the postman comes. There’s only one small piece of mail, which slips in like a piece of confetti, drifting to the mat. I pick it up with interest because it’s handwritten and I can’t think when I last received one of those.

Then it’s out of my mind because I’m locking up and putting on my puffa jacket as I walk to the car. And then I’m driving to town – the sun a pale wedge of lemon above me – running through what to say to Duane Dee.

Is he well? Is he pushing himself too hard? Is he sleeping enough? He always looks chronically tired.

I ask too many questions. Intrusive. That’s the little bit of feedback my boss always gives me. Jess, here’s some feedback you didn’t ask for…

When people say you’re intrusive, assertive or direct, they’re basically telling you to be quiet. Are men given feedback like that? I don’t know. But I’m thinking about this as I enter the Sicilian café which is my personal preference and not Duane’s. Whenever he chooses, we end up somewhere too dark to see our food, sitting on tasselled mats.

The service here is very good. Within seconds of my sitting down, the waitress hands me a menu even though I always have an Americano and an almond pastry.

Glancing in the wall mirror beside me, I note that my expression is severe. A semi-friend told me recently that I carry a lot of tension in my face. It was a bit passive aggressive of her to say so, but I know what she means. I have bony cheekbones and thin lips that can look mean if I’m not careful.

So, I’ve been making an effort lately to smile more, worry less and unclench my hands. I also tend to tap my teeth together and I’m doing that now in time to the café music as I wait for Duane.

And then I remember the letter.

It takes me several minutes to find it, as well as my reading glasses. Since hitting my mid-forties, I misplace things all the time. I normally ask myself, where would I have put it? And it’s never there.

The letter is in the front compartment of the rucksack which I haven’t used for so long, there are crumbs and bits of foil in there from the primary school-run. Flicking the crumbs off the envelope, I examine the handwriting, feeling a pang of nostalgia at the idea of someone putting pen to paper just for me.

The writing is tiny and in capitals, internet code for shouting, but in this case is more like whispering. Something about it gives me the sense that it’s trying its hardest not to offend or take up too much space. I have to prise the paper out of the envelope, where it’s wedged, folded into eighths.

I HOPE YOU’RE SITTING DOWN TO READ THIS AND THAT YOU’RE ALONE.

THIS IS SO DIFFICULT. YOU WOULDN’T BELIEVE HOW OFTEN I IMAGINED TALKING TO YOU, BUT I DIDN’T KNOW HOW TO GO ABOUT IT. AND NOW IT’S TOO LATE.

For what? I check the postmark on the envelope: Monday 5th October, 5pm. That was last night. Shifting uneasily in my seat, I turn over the letter to see who sent it: Holly Waite.

I’VE KNOWN FOR SOME TIME THAT I WON’T MAKE OLD BONES, BUT NOW IT’S URGENT AND I’VE ONLY GOT A FEW DAYS LEFT. SO, I’LL JUST COME OUT WITH IT.

ON 22nd DECEMBER 1990, MY MUM NICOLA WAITE WAS RAPED BY 3 MEN IN THE MONTAGUE CLUB, BATH. THE MEN WERE ANDREW LAWLEY, DANIEL BROOKE AND MAXIMILIAN JACKSON.

MY MUM FELL PREGNANT WITH ME. SHE ASKED THE MEN FOR HELP, BUT THEY DIDN’T WANT TO BE INVOLVED. SHE NEVER RECOVERED FROM WHAT HAPPENED AND DIED 9 YEARS AGO OF AN ACCIDENTAL OVERDOSE.

EVERYTHING I OWN IS AT STONE’S STORAGE, UNIT 21, 156 CLEVEDON ROAD. IF YOU GO TO THEM, THEY’LL GIVE YOU THE KEY. YOU’RE WELCOME TO ANYTHING. I HAVE NO ONE ELSE TO LEAVE IT TO.

WE NEVER KNEW WHO MY FATHER WAS. SO, I’M ALSO WRITING TO:

I’M SORRY TO DO THIS. I KNOW IT’LL BE A SHOCK, BUT I COULDN’T GO WITHOUT TELLING YOU. YOUR HUSBANDS WENT UNPUNISHED, WALKING AWAY COMPLETELY FREE. I ALWAYS HOPED THAT ONE DAY I’D SEE JUSTICE DONE, BUT I COULDN’T THINK OF A WAY TO DO THAT WITHOUT DESTROYING MORE LIVES.

NOW THAT I’M OUT OF TIME, I CAN SEE THAT IT WASN’T MY CHOICE TO MAKE. SO, I’M PASSING IT OVER TO YOU, TELLING YOU WHAT YOU SHOULD HAVE KNOWN FROM THE START. IT ALWAYS FELT SO PERSONAL, BUT IT WASN’T, NOT REALLY. YOU CAN’T DRAW A LINE WHERE ONE LIFE STARTS AND ANOTHER BEGINS.

I HOPE YOU DO THE RIGHT THING.

The kiss throws me the most. I stare at it. It’s like she’s trying to add a softener, after making the worst possible accusation.

I read the letter again, my eye lingering on Maximilian Jackson. No one ever calls Max that. It doesn’t even sound like him.

“Jess?” I glance up to see Duane standing there, untying his Aztec scarf, clay stains on his jumper. “Alright, darlin’?”

I can’t pull out a smile for him. I’m not great at hiding my emotions. It’s one of the things Max has always loved about me and I like it about myself too. Yet suddenly, it feels like an impairment; a liability even.

Slipping the letter into my bag, I stand up robotically and we exchange kisses. He smells of autumn air and his cheek as it brushes mine is so cold it makes me shiver. “Hi, Duane.”

“So…how are you?” I manage to ask. “How’s the new project going?” I sound uptight, formal. I clench my hands, trying to stop them from trembling.

The waitress takes our order. And then I sit rigidly in my chair, listening as Duane describes his latest creation – how it embodies technoculture, hyperreality, paranoia.

When the coffees arrive, I drink mine too quickly and burn my tongue.

“Actually, I just need to pop to the ladies. Could you excuse me a minute?”

Out in the restroom, I stand with my hands against the sink, trying to breathe, feeling dizzy. Closing my eyes, I see Maximilian Jackson again in that tiny handwriting.

It’s not Max. It’s some sort of mistake. Holly Waite…whoever that is...is wrong. And perhaps, dead.

I don’t think I’ve ever felt happy before to hear of someone’s demise, but as I open my eyes it occurs to me that if this woman is deceased then there’s no one present to make any accusations.

I return to the table, where Duane is tucking into his calzoni, a thread of cheese hanging from his lip. Normally I wouldn’t hesitate to tell him, or anyone, so they could set themselves straight.

But something strange happens and I just sit there, silent, watching the thread dangle as he chews and talks. It seems to me that I don’t know who I am. Or more to the point, who my husband is.

Good Husbands will be available in bookstores across Canada and online on June 7, 2022. Click the button to learn more.