Start reading Find You First by Linwood Barclay and enter to win! 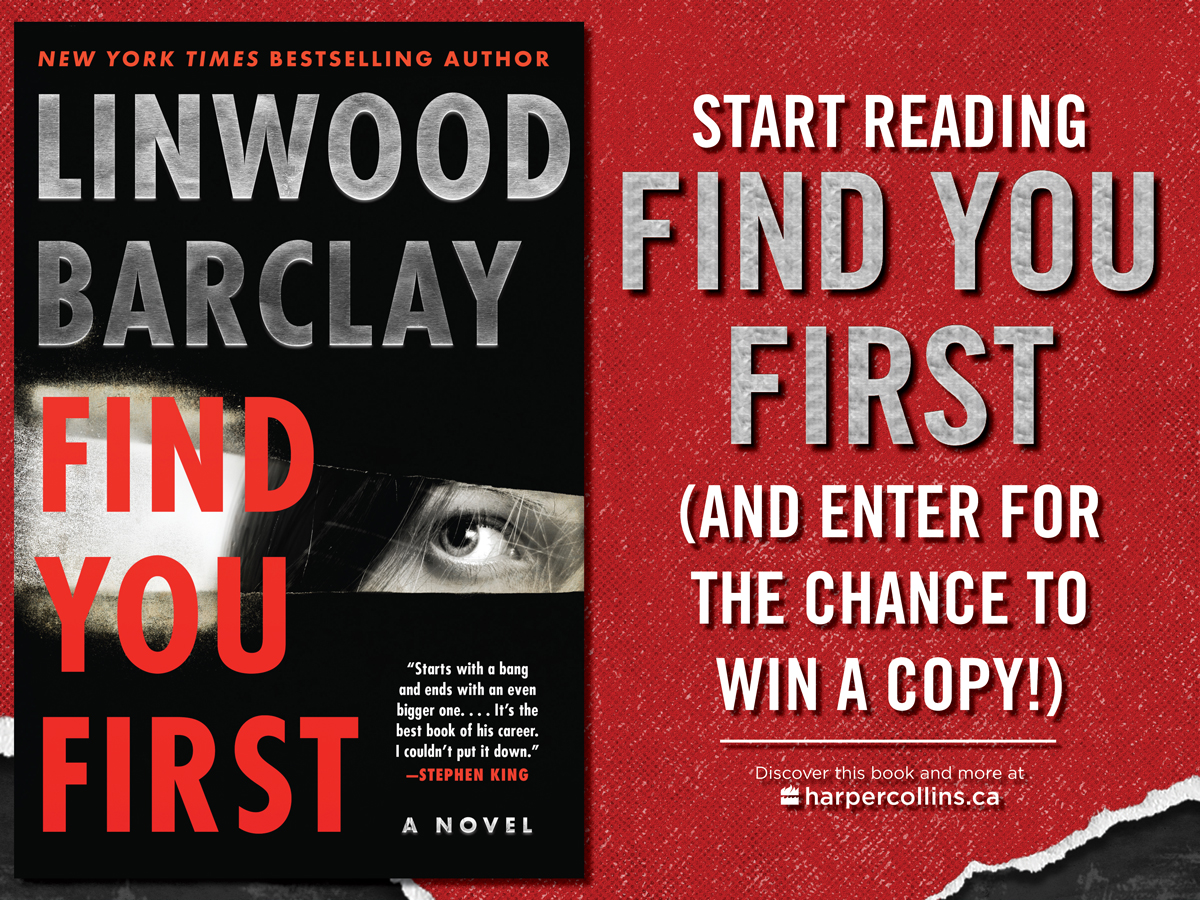 Dr. Alexandra Nyman was expecting some reaction when she delivered her diagnosis, but Miles Cookson was busy looking at his phone.

“Did you hear me?” Alexandra asked. “I know that’s blunt, but you’ve always told me to be straight with you. There’s no way to sugar coat this.”

She’d come around her desk and was sitting in a leather chair next to Miles’s, angled slightly so that her right knee was inches away from his left. She held a file folder with half an inch of paperwork stuffed into it.

Miles, still staring at the phone, both thumbs tapping away, said, “I’m looking it up.”

“You don’t have to look it up,” she said. “I’m sitting right here. Ask me anything you want.”

He glanced at her. “You’re wrong, Alex. I can’t be dying. I’m fucking forty-two years old. It’s something else. Has to be. Look at me, for Christ’s sake.”

She did. Miles presented as someone in good shape. Five-eight, trim at a hundred a sixty pounds. She knew he run marathons into his thirties, and still jogged a few times a week. Nearly bald, but he made it work in a Patrick Stewart kind of way.

“Fuck the tests,” he said, putting down the phone and looking her in the eye. “All my so-called symptoms, you can put them all down to stress. Are you telling me you’ve never been short-tempered, or restless, or have things slip your mind now and then? And yeah, okay, I’ve been a bit clumsy. Falling over my own feet. But it can’t be what you’re saying.”

She said nothing, but decided to let him vent.

“Jesus,” Miles whispered. “How could I … It’s tension, stress, simple as that. You fucking doctors, you’re always looking for trouble where there isn’t any. Finding a way to justify all those years you went to school.”

Alexandra frowned, but not critically. She understood the anger.

“If all you had was some restlessness, a bit of forgetfulness, even the odd mood swing, I would agree with you. But stress doesn’t explain the involuntary body movements, the jerking, the twitching you’ve been -- ”

“And I should clarify what I said, about you dying. There’s no cure, there’s nothing we can do. I can prescribe tetrabenazine, which will help with your symptoms when they become more pronounced, but it’s not a cure.”

Miles laughed sardonically. “Why couldn’t it have been cancer? There’s stuff they can do for cancer. Cut it out, hit it with chemo. But this?”

“There’s no getting around it,” Alexandra said. “Huntington’s … it’s like you take Alzheimer’s, ALS, and Parkinson’s and put them all into a blender. Your symptoms are very similar to any of those.”

“The other day,” he said, “I wanted to put one foot in front of the other, something as simple as that, and my brain was like, no way, Jose. Not happening. And then, a second later, it was okay. Dorian, my assistant, had set up a meeting, told me all the details. Five minutes later, I could barely remember any of it.”

“I go through periods, I feel restless, like my skin’s crawling, I have to do something, I can’t relax.” He paused. “How bad will it get?”

“It’s a brain disease,” she said matter-of-factly. “You’ll lose more and more motor control. Unlike ALS, where you can remain mentally sharp while your body’s ability to do things deteriorates, Huntington’s will impact your cognitive abilities.”

The doctor nodded. “There will come a point where you will need constant care. There is no cure. They’re working on it, and they’ve been working on it for some time. One of these days, it’ll happen.”

“But not soon enough to help me,” he said.

The doctor leaned back in her chair and folded her arms. “This isn’t something you can buy your way out of, Miles. Not this time. All the money in the world won’t bring about a cure overnight. There are some very dedicated people working on this.”

Miles turned his head, looked out the window.

Miles took that in. “How long?”

“Well, that’s the thing. Whether it’s Huntington’s, or cancer, or your heart, whatever, predicting life expectancy is a mug’s game. Look at Stephen Hawking. When he was diagnosed with ALS – you know, Lou Gehrig’s Disease – they gave him two years. He lived for several more decades. Last year, I had someone in for a checkup, gave the guy a clean bill of health. Dropped dead two days later of a heart attack.”

“I know. For you, it could be four or five years, maybe less, or maybe you’ve got twenty years. When we did your genetic test, we were looking for a high nucleotide repeat. Below thirty-six the likelihood of Huntington’s is much less, but when you get up around thirty-nine, then you’re -- ”

“I don’t know what you’re talking about. Apps, I understand. DNA stuff, not so much.”

Alexandra nodded her understanding. “Sorry. Too technical. Look, we’re going to want to do regular assessments, see how you’re doing. That may give us a better understanding of your long-term prognosis.”

“I could live a long time, but it could be hell,” he said.

“Yes. Here’s the bottom line. You know what you’ve got. If there are things you want to do, things you want to accomplish – amends you want to make – now is as good a time as any. Maybe you end up doing it with plenty of time to spare. But a diagnosis like this, it sharpens your focus. Helps you set priorities.” She sighed. “I’m sorry, Miles. I’ll be with you every step of the way.” She paused. “There’s something else we should talk about.”

“No, but let me ask you about family history again. Did either of your parents have Huntington’s?”

“No,” he said. “I mean, not that I know of. I suppose one of them could have but it never had a chance to show itself. They died in a car accident when they were in their forties. My dad was a drunk. He ran their Ford Explorer into a bridge abutment on the Merritt Parkway.”

“The thing about Huntington’s is, it’s very much an inherited condition. You’re right, that one of your parents might have developed it had they not died prematurely. You could have inherited it from one of them. If a parent has Huntington’s, there’s a fifty per cent chance that any of their children will have it, too.”

“Right. So, there’s a high probability that your brother has it, too. I think he should be tested.” She hesitated. “Are you close?”

“We’re … close enough. Things got a bit strained after he married Cruella DeVil.”

“Caroline. I’m not … a fan. But I’m not exactly her favorite person, either.” He thought about what the doctor had said. “I’ll talk to Gilbert. Suggest he get tested. Or maybe…”

Alexandra waited, trying to wish him to be more forthcoming. When he wasn’t, she forced a smile.

“There is one, tiny piece of good news,” she said.

“This isn’t like that joke, is it?” Miles asked. “Where the doctor says I have bad news and good news? The bad news is, you’re dying, but the good news is, I’m sleeping with Brad Pitt.”

“Well, you’re not married. You have no children. If you did, this would be devastating for them. It’d be terrible enough to learn you’ve had this diagnosis. But on top of that, they’d have to deal with the news that they might have it as well. One chance in two. That would be, for you, I think, an extra emotional burden you really don’t need at this time.”

Miles stared at her, expressionless.

“Sorry,” he said. “Just blanked out there for a second.”

Alexandra grew concerned. “Do you have children, Miles?”

And Miles thought, Isn’t that just the fucking million-dollar question?

Find You First will be available in bookstores across Canada and online on May 4, 2021. Click the button to learn more.

Enter for your chance to win a copy of
Find You First by Linwood Barclay!

Excerpt from Find You First, Copyright © 2021 by Linwood Barclay. All rights reserved.