Start reading Every Vow You Break by Peter Swanson and enter to win!

A bride's dream honeymoon becomes a nightmare when a man with whom she's had a regrettable one-night stand shows up. Don't miss this electrifying psychological thriller from the acclaimed author of Eight Perfect Murders! 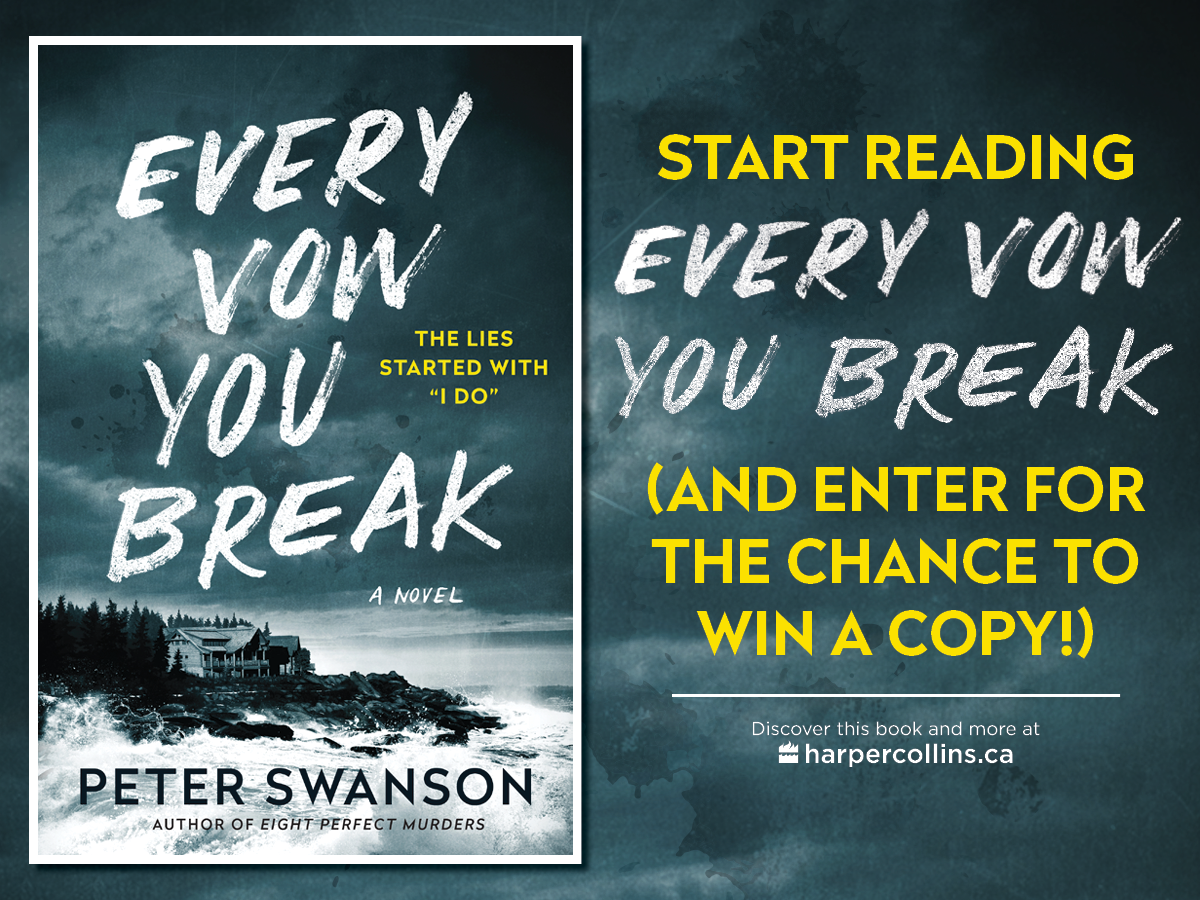 She first spotted him at Bobbie’s Coffee Shop on Twenty-Second Street. He was at a window seat, idly looking at his phone, a white mug in front of him. Abigail was on her way to the office for her half day, dodging pedestrians on the sidewalk, thinking about the wedding, wondering if maybe she should have invited her cousin Donald and his wife, whose name she always forgot.

Her feet kept moving but it was as though her heart had skipped a beat. It was definitely him, same wiry frame, same beard, same high cheekbones. Even through the glare coming off the plate-glass window, she recognized him right away. And she also knew that he’d come to New York City because of her. He must have.

When she made it to her office and settled down at her desk, her heart still thudding, she took a moment to consider all the possibilities. First of all, why was she so sure he was here to find her? She lived in New York, not some small town that no one visited. He could be here on vacation, here to visit friends, here for work. And even if he had come here to find her, how much did he even know about her? They hadn’t given each other their real names. She still only knew him as Scottie, and he knew her as Madeleine. She told herself there was nothing to worry about and tried to concentrate on work.

But walking home, the nights getting darker earlier these days, she took a different route, staying off the busy avenues.

She had no plans for that evening—Bruce was attending a work dinner—and she made herself an omelet, flipped through the channels, found one that was showing The Ring, the American remake with Naomi Watts. She’d watched it as a kid at a slumber party, and all the girls there had been traumatized except for Abigail, who’d fallen asleep in a brand-new world, one that had movies in it that seemed designed just for her.

After the credits had rolled, she sent a text to Bruce saying she was going to bed, then quickly checked her emails, ignoring one from Zoe titled emergency wedding question and opening an email from an address she didn’t recognize titled simply, Hi.

Dear Madeleine, I am sorry to write you like this so soon before your wedding, but I can’t stop thinking about you. If you don’t share similar feelings, then tell me and I promise to never bother you again. But if you do feel the same way, then maybe it’s not too late to cancel the wedding. The exact halfway point between New York City and San Francisco is Wood River, Nebraska. Maybe they have a Travelodge we can meet at? Just hopeful, Scottie

She read the message through twice, an ache moving from the base of her throat down to her stomach. The email would have been bad enough, but she’d seen him earlier. In her neighborhood. Or had she? If he was really here, then why didn’t he say so in the email?

He doesn’t want to entirely freak you out.

He was here, and he was looking for her. Maybe he’d figure if she responded positively to the email, he’d say something like, Guess what, I’m actually in New York. Didn’t want to tell you because I thought you might be thinking I was stalking you. Ha ha.

And maybe it was as simple as all that. He was here in New York for some reason besides coming to find her and decided to send the email. All she had to do was tell him that she was still getting married, and she’d never hear from him again. But another part of her was telling her that it was more serious than that, that he’d somehow fallen for her, and now he was stalking her. What other word described it?

Also: How had he gotten her email address?

Even without her real name he could have figured it out, right? Maybe he knew someone at the hotel who had procured it for him. Or maybe she’d said something to give away the identity of Bruce—he was a fairly public figure, after all. Either way, the fact that he now had her email address meant he knew her name, and she didn’t know his. His email address was simply [email protected], which gave no indication of his identity, unlike hers, [email protected], which gave up not only her name, but the goddamn year of her birth. She googled “blue streak” on the off chance she’d luck out, but there were too many things: a movie, a kind of fish, and several companies, even one in San Francisco, but it was for a catering place that looked as though it had gone out of business.

She considered her options. Simply not answering him felt like the right thing, but somehow she knew he’d try again. Reluctantly she decided to send a reply, something as impersonal as she could make it, letting him know that his feelings were one-sided. She began to construct the email. Should it be dismissive? She didn’t think so. The last thing she wanted to do was piss this guy off. The message should be nice yet firm, unmistakably a brush-off. She also wanted the email to underplay what had happened between them in California, just in case someone else read it. There was no reason for her to confirm what had transpired. She grimaced to herself, realizing that she was acting like a criminal. She wrote:

Scottie, it was so nice meeting you. Yes, my wedding is still on. Three days away, and I can’t wait. Thanks for thinking of me, and take care.

She read it over about ten times, finally deciding that it struck the perfect middle ground between being nice and making sure that he got the message. She took out the “so,” worried that it might sound a little too positive, and hit send.

Twelve hours later there was no reply.

She told herself that was the last she’d hear from the stranger she’d slept with on her bachelorette weekend.

“How many men have you slept with?”

“Excuse me?” she said. “That’s none of your business.”

“But it’s part of what we’re talking about, right?” he asked, leaning back slightly, reaching for his glass of wine.

They’d been talking about marriage, or, more specifically, Abigail’s upcoming marriage—three weeks away, exactly—and how she could only admit to being ninety-nine percent sure—“ninety-nine-point-ninety-nine, really”—that she was doing the right thing.

“It’s not necessarily part of what we’re talking about,” she said, reaching for her own glass of wine, even though it was empty. He picked up the bottle to refill it.

“Well, that’s like saying that sex isn’t part of marriage,” he said.

“Have you met my parents?” she said. It was more of a joke than an actual observation. Her parents were separated; their version of a separation, anyway, which meant that her dad had moved into the small studio apartment above the garage.

“My guess is you have very little idea about what your parents get up to, or don’t get up to, in the bedroom.”

He’d filled her glass too high, but the wine—a Pinot Noir—was delicious, and she took a long swallow. Slow down, she told herself, although she was also telling herself that it was a bachelorette party (it was her bachelorette party) and even though all her friends had disappeared somewhere in the haze of the previous hours, she was still entitled to drink some wine with the blue-eyed bearded guy wearing the vintage flannel shirt and the wedding ring. He was very Californian, she thought, with his bright white teeth, and some kind of braided leather bracelet with a green stone pendant, but she wasn’t holding that against him. They were in California, after all, on a terraced patio surrounded by an olive grove. Abigail moved her Adirondack chair a little closer to the dying fire.

“That’s probably for the best,” she said.

“Not knowing what my parents get up to in the bedroom.”

The man said, “That’s a good idea.” Abigail didn’t know exactly what he was talking about but then he stood, lifted his own chair, and moved it closer to the firepit. “We’re the only ones left out here,” he said.

“I don’t even know your name, do I?” Abigail said, worried, as soon as she’d said it, that he’d already told her.

“If I tell you, will you answer a question?”

“You already know the question.”

“How many men have I slept with?”

“Right. How many men have you slept with?”

Every Vow You Break will be available in bookstores across Canada and online on March 23, 2021. Click the button to learn more.

Enter for your chance to win an early copy of Every Vow You Break by Peter Swanson!

Excerpt from Every Vow You Break, Copyright © 2021 by Peter Swanson. All rights reserved