Jay Baruchel was Born Into It

In Fever Pitch meets Anchor Boy, Montreal Canadiens superfan Jay Baruchel tells us why he loves the Habs no matter what

It’s no secret that Jay Baruchel is a die-hard fan of the Montreal Canadiens. He talks about the team at every opportunity, wears their gear proudly in interviews and on the street, appeared in a series of videos promoting the team, and was once named honorary captain by owner Geoff Molson and Habs tough guy Chris Nilan. As he has said publicly, “I was raised both Catholic and Jewish, but really more than anything just a Habs fan.”

In Born Into It, Baruchel’s lifelong memories as a Canadiens’ fan explode on the page in a collection of hilarious, heartfelt and nostalgic stories that draw on his childhood experiences as a homer living in Montreal and the enemy living in the Maple Leaf stronghold of Oshawa, Ontario. Knuckles drawn, and with the rouge, bleu et blanc emblazoned on just about every piece of clothing he owns, Baruchel shares all in the same spirit with which he laid his soul bare in his hugely popular Goon movies. Born Into It is a memoir unlike any other, and a book not to be missed. 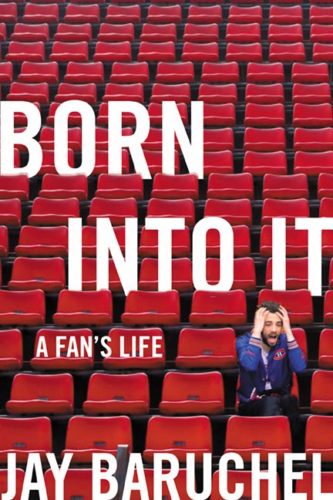 Click here to find out which cities Jay will be touring this Fall!