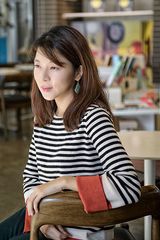 Sohn Won-pyung is a film director, screenwriter, and novelist living in South Korea. She earned a BA in social studies and philosophy at Sogang University and film directing at the Korean Academy of Film Arts. She has won several prizes, including the Film Review Award of the 6th Cine21, and the Science Fantasy Writers’ Award for her movie script I Believe in the Moment. She also wrote and directed a number of short films, including Oooh You Make Me Sick and A Two-way Monologue. She made her literary debut in 2017 with this, her first full-length novel, Almond, which won the Changbi Prize for Young Adult Fiction, followed by which won the Jeju 4.3 Peace Literary Award.