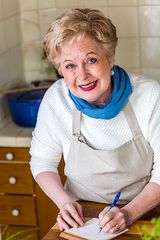 Patricia Wells is a journalist, author, and teacher who runs the popular cooking school At Home with Patricia Wells in Paris and Provence. She has won four James Beard Awards and the French government has honored her as a Chevalier de l'Ordre des Arts et des Lettres, recognizing her contribution to French culture. A former New York Times reporter, she is the only foreigner and the only woman to serve as restaurant critic for a major French publication, L'Express. She served as the global restaurant critic for the International Herald Tribune for more than twenty-five years. She lives in Paris and Provence with her husband, Walter Wells.