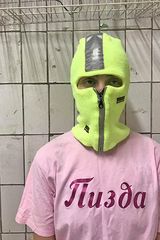 NADYA TOLOKONNIKOVA is an artist, political activist, and founding member of Pussy Riot. She is the recipient of The Lennon Ono Grant for Peace, and is a co-recipient of The Hannah Arendt Prize for Political Thought. Following her release in 2013, she opened the Mordovia office of Zona Prava, a prisoners' rights non-governmental organization. Later, she started MediaZona, an independent news service now partnered with The Guardian.