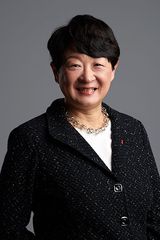 Lan Yan was not allowed to enter higher education because her Communist family had been designated as counter-revolutionaries. In 1969, she was sent to a re-education camp in Henan, where her mother had been for a year. In 1977, the year after the Cultural Revolution ended, she enrolled at university. Exceptionally motivated, she was awarded grants to study at the most prestigious universities in Europe and the United States. In 1991, she joined the Gide Loyrette Nouel law firm based in Paris and became the first foreign woman to make partner. In 1998, she returned to China to run the firm's Beijing office. In 2011, Lan Yan joined Lazard as managing director to lead its Chinese activities. Today, she is the vice chairman of investment banking of Lazard and the chairman and CEO of Lazard Greater China (Beijing, Hong Kong, Taiwan).