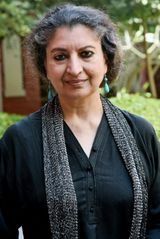 Geetanjali Shree (Ghee-TAHN-juh-lee Shree) is the author of five novels, including Tomb of Sand, for which she was awarded the 2022 International Book Prize, and several story collections. Her work has been translated into English, French, German, Serbian and Korean and has received numerous accolades. She lives in New Delhi.

Daisy Rockwell is a painter, writer and translator living in Vermont. She has translated a number of classic works of Hindi and Urdu literature, including Upendranath Ashk's Falling Walls, Bhisham Sahni's Tamas, and Khadija Mastur's The Women's Courtyard. Her 2019 translation of Krishna Sobti's A Gujarat Here, a Gujarat There was awarded the Modern Language Association’s Aldo and Jeanne Scaglione Translation Prize.