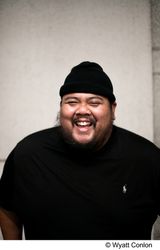 Alvin Cailan's career began with a classical French culinary education at Oregon Culinary Institute, followed b stints at some of the West Coast's finest restaurants. Chef Alvin first grabbed the public's attention as a trailblazer in the culinary world when he launched the Eggslut food truck in Los Angeles. The truck rapidly became a foodie cult favorite and it remains one of the most popular food destinations in L.A, with long lines every day at the Grand Central Market location. Alvin then turned his attention to supporting other aspiring restaurateurs and to the promotion of Los Angeles's Filipino food movement. Soon, Unit 120, Chef Alvin's pop-up kitchen space, became the incubator for Amboy, his critically acclaimed Filipino food venture, along with the award-winning Filipino restaurant LASA. Chef Alvin is now focusing on his true passion: bolstering the modern Filipino food movement across the country, and today, he is arguably America's most high-profile champion of it. He is planning to open his next restaurant, Amboy, in Los Angeles soon. He has been featured in prestigious publications like Bon Appetit, Food and Wine, and Bloomberg. Alvin is also the host of the hugely popular The Burger Show on the Complex/First We Feast YouTube channel.