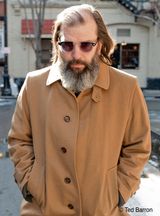 STEVE EARLE is a singer-songwriter, actor, activist, and the author of a Los Angeles Times Book of the Year, the story collection Doghouse Roses. He has released more than a dozen critically acclaimed albums, including the Grammy winners The Revolution Starts Now, Washington Square Serenade, and Townes. He has appeared on film and television, with celebrated roles in The Wire and Treme. His album entitled I’ll Never Get Out of This World Alive was produced by T Bone Burnett. He often tours with his wife, singer-songwriter Allison Moorer.