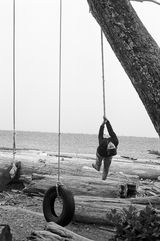 J.M. Kelly loves the rain, which is good because she was born and raised in Portland. She spent her childhood with her nose in a book, often in the backseat of whatever old car her dad had at the time. She's worked as an actress, a Minor League Baseball souvenir hawker, Snow White at birthday parties, and various other not-so-odd jobs. Now she mostly writes novels, but she still dabbles in sketch comedy, nonfiction articles, and teaching writing to both kids and adults. She wrote and starred in a full-length play, along with her husband and his guitar.