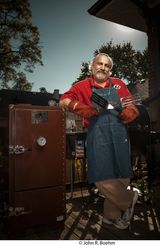 The president and founder of AmazingRibs.com, one of the most popular online barbecuing sites, MEATHEAD and has penned hundreds of articles about food and drink for the Washington Post, the Chicago Tribune, AOL, Wine Spectator, and a weekly column for Huffington Post. His photos have appeared in such publications as Time and Playboy.  He judges barbecue cookoffs from Kansas City to Memphis, including the Jack Daniels World Championship Invitational Barbecue and the College Football Hall of Fame Barbecue.