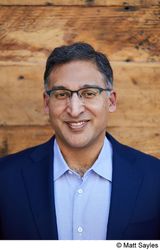 NEAL KATYAL is the Paul and Patricia Saunders Professor of Law at Georgetown University and a partner at a law firm where he leads one of the largest U.S. Supreme Court practices in the nation. He previously served as Acting Solicitor General of the United States (the government’s top courtroom lawyer). He has argued more Supreme Court cases in U.S. history than has any minority attorney (39 in total), recently breaking the record held by Thurgood Marshall. American Lawyer magazine recently named him the very top litigator of the year nationwide and the Justice Department awarded him the Edmund Randolph Award, the highest award the department can give a civilian. A frequent contributor to MSNBC and the New York Times, he has been named one of GQ’s Men of the Year and has appeared on virtually every major American news program, as well as House of Cards, where he played himself.