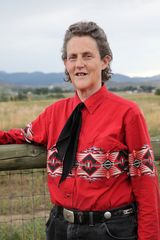 TEMPLE GRANDIN is one of the world’s most accomplished and well-known adults with autism. She is a professor at Colorado State University and the New York Times bestselling author of several books, including The Autistic Brain, which have sold more than a million copies. Named one of Time's most influential people in 2010, the HBO movie based on her life, starring Claire Danes, received seven Emmy Awards.