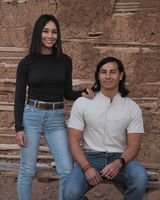 Chelsey Luger is a writer and wellness advocate originally from North Dakota, an enrolled member of the Turtle Mountain Band of Chippewa and descendant of the Standing Rock Sioux Tribe. She got her undergraduate degree at Dartmouth College, concentrating on comparative histories of global Indigenous cultures, and later earned an M.S. in Digital Media at Columbia University's Graduate School of Journalism. She is the co-founder of Well For Culture. Her writing has appeared in the Atlantic, Huffington Post, Yes! Magazine, and other outlets.