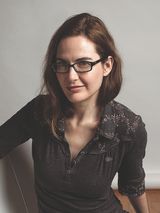 Lenore Appelhans loves dancing almost as much as Lucky and would jump at the chance to dance with raccoons. Her father served in the United States Air Force, which gave Lenore an early taste of wanderlust, and to date she has visited over seventy countries. Lenore holds an MFA in creative writing from Vermont College of Fine Arts and is the author of several teen novels. Her debut picture book, Chick-o-Saurus Rex, was illustrated by Daniel Jennewein and was called “a good-hearted romp” by the New York Times. Lenore lives and writes near Washington, DC.