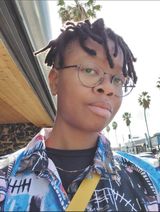 Brittney Williams is Los Angeles-based creative originally from South Carolina. Williams is a storyboard and comic book artist who draws A LOT. In 2012 she interned at Walt Disney Animation Studios as a storyboard artist. Since then, she's worked for a variety of animation studios and publishers including Netflix, Cartoon Network, Dreamworks TV, BOOM! Studios, DC Comics, and Marvel Comics. As a two-time GLAAD award nominee, she exists to create things for kids and the queer community.