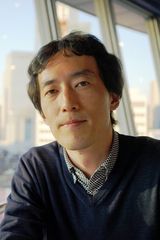 Tomihiko Morimi was born and raised in Nara Prefecture, Japan. His first novel Taiyo no to (Tower of the Sun), which he wrote while studying at Kyoto University, won the 15th Japan Fantasy Novel Award. In 2006, he received the Yamamoto Shugoro Prize for the novel The Night is Short, Walk on Girl, and in 2010, Penguin Highway was awarded the Japan SF Grand Prize. Several of his works have been adapted into critically acclaimed anime series and films. He still lives and works in Nara.