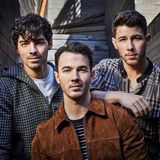 JONAS BROTHERS are a Grammy-nominated multiplatinum pop band made up of Kevin, Joe, and Nick Jonas. With 5 studio albums and over 20 million album sales, they have performed at some of the world’s biggest venues, from the Grammy awards to the White House. After going on hiatus in 2013, the band reunited in 2019 and released a single, “Sucker,” and the album Happiness Begins, both of which debuted at #1. Originally from New Jersey, they now split their time between Los Angeles, New York, and New Jersey.