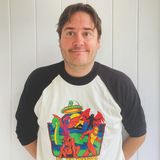 Michael Brumm is a writer/producer for The Late Show with Stephen Colbert. He’s also been a consulting producer for At Home with Amy Sedaris and a four-time Emmy-winning writer for The Colbert Report. He is the coauthor of the children’s book His Royal Dogness and has written for various magazines and video games. Michael currently lives in New York City with his wife, Camille, and their two little cryptids, Henry and Bea.