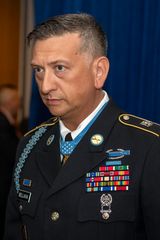 Staff Sergeant David Bellavia spent six years in the U.S. Army, including some of the most intense fighting of the Iraq War. He has been awarded the Silver Star and Bronze Star for his actions in Iraq, and recommended for the Distinguished Service Cross and Medal of Honor for his actions in Fallujah. In 2005, he received the Conspicuous Service Cross (New York State's highest award for military valor) and was inducted into the New York State Senate Veterans Hall of Fame. He is the cofounder of Vets for Freedom, an advocacy organization of veterans concerned about the politicization of media coverage of military operations in Iraq and Afghanistan. His writing has been published in The Philadelphia Inquirer, National Review, The Weekly Standard, and other publications. He lives in western New York.