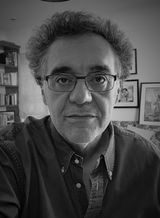 Rodrigo Garcia was born in Colombia, grew up in Mexico City, and now lives in Los Angeles with his family. He studied history at Harvard University before becoming a screenwriter and director. His theatrical films include Nine Lives, Albert Nobbs, and Last Days in the Desert, and he has directed episodes of Six Feet Under, The Sopranos, and the pilot of Big Love, for which he received an Emmy nomination. He was a writer, executive producer, and series showrunner for HBO’s In Treatment, and directed several of the series’ episodes.