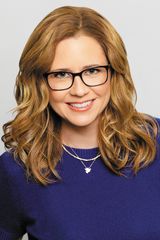 Jenna Fischer is best known for playing Pam Beesly on The Office, for which she received an Emmy Nomination for Best Supporting Actress and two SAG Awards for Outstanding Performance by an Ensemble Comedy. Most recently, she starred in the ABC comedy, Splitting Up Together. Fischer's film credits include Mike White's feature “Brad's Status,” in a role opposite Ben Stiller; “The 15:17 to Paris,” directed by Clint Eastwood; “The Giant Mechanical Man” (which she also produced);“Solitary Man,” opposite Michael Douglas; “Walk Hard: The Dewey Cox Story,” produced by Judd Apatow; and “Blades of Glory,” opposite Will Ferrell. A trained theatre actress, Fischer also starred in the Off-Broadway production of Reasons to Be Happy written and directed by Neil LaBute; and in the original cast of Steve Martin’s comedy Meteor Shower for The Old Globe Theater. In 2018, Fischer published her first book, The Actor’s Life (Ben Bella Books). She is now producer, writer and co-host of the weekly Office Ladies podcast.