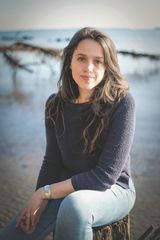 Natsha Donovan is a self-taught illustrator from Vancouver, BC, with a focus on comics and children’s illustration. Her work has appeared in two anthologies: The Other Side, edited by Melanie Gillman and Kori Handwerker, and This Place, published by Portage & Main Press. She illustrated the award-winning children’s book The Sockeye Mother by Brett D. Huson and the graphic novel Surviving the City by Tasha Spillett. She has a degree in anthropology from the University of British Columbia and has worked in academic and magazine publishing. She currently lives in Bellingham, Washington. Natasha Donovan is a member of the Métis Nation of British Columbia.