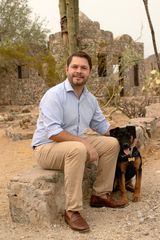 Ruben Gallego (D, AZ) represents the 7th District of Arizona in the U.S. House of Representatives. A son of Hispanic immigrants, Representative Gallego was the first in his family to attend college, graduating from Harvard University with a degree in international relations. While an undergrad, Gallego enlisted as an infantryman in the Marine Corps Reserve. Private (later lance corporal) Gallego deployed to Iraq in 2005, where he and the other members of Lima Company, 3rd Battalion, 25th Marine Regiment, saw some of the fiercest fighting of the war. Elected to Congress in 2014 as a Democrat, Gallego is a member of the House Committee on Veterans’ Affairs and the House Armed Services Committee, where he serves as chairman of the Intelligence and Special Operations subcommittee. Gallego lives in Phoenix, Arizona, with his wife and son.