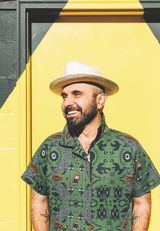 Lucky Diaz is a multi–Latin Grammy Award–winning and six-time Emmy–nominated musician and songwriter. His work has been praised by NPR, Billboard magazine, and the New York Times. In 2020, his album Buenos Diaz was named an official selection of notable works for children by the American Library Association. He currently lives in Los Angeles with his wife, Alisha, and daughter, Indiana Maven. His favorite paleta flavor is horchata. www.luckydiazmusic.com