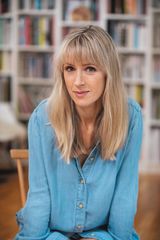 Helen Russell was formerly the editor of marieclaire.co.uk, writes for the Guardian and is the author of the bestselling The Year of Living Danishly (TCM c.50k).

Russell is an author, journalist and speaker. Her first book, The Year of Living Danishly – Uncovering the Secrets of the World’s Happiest Country (TCM c.50k) became an international bestseller and has been optioned for television. As a correspondent for the Guardian, Russell writes for publications around the world, including National Geographic, The Wall Street Journal, The Telegraph, the Observer, Grazia, Stylist, The Times and The Sunday Times.

She’s spent the last eight years studying cultural approaches to emotions and regularly speaks about her work around the world, including at TEDx and in her hugely popular Action for Happiness talks. As the former editor of marieclaire.co.uk, Helen spent twelve years in London but currently lives in Jutland, Denmark with her husband and three children.