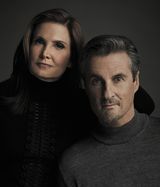 L. R. Dorn is the pseudonym for Matt Dorff and Suzanne Dunn. Matt Dorff is a Los Angeles native and graduate of the USC School of Cinematic Arts, has written, produced, and/or directed over 60 hours of dramatic television (CBS, NBC, ABC, Showtime, HBO and elsewhere). He lives in Los Angeles. Suzanne Dunn is a two-time Emmy Award winner, has written two screenplays produced and aired on Lifetime Television and Ion Television. She grew up in Bucks County, Pennsylvania, and earned degrees from Penn State and the University of Chicago. She has worked at DIRECTV and is a member of the Producers Guild of America and Academy of Television Arts & Sciences. She is also a yoga teacher and lives in Los Angeles.