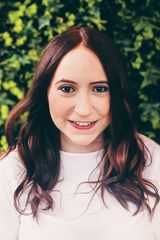 Marianne Cronin was born in 1990 and grew up in Warwickshire, England. She studied English at Lancaster University before earning a PhD in Applied Linguistics from the University of Birmingham. She now spends most of her time writing, with her newly-adopted rescue cat sleeping under her desk. When she's not writing, Marianne can be found performing improv in the West Midlands, where she now lives. Her debut novel, The One Hundred Years of Lenni and Margot, is to be translated into over 20 languages and is being adapted into a feature film by a major Hollywood studio.