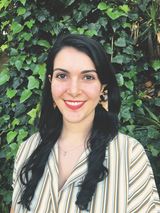 Teny Issakhanian is an Armenian American illustrator, building worlds and stories as a storyboard artist and visual development artist in the entertainment industry. She has worked on a multitude of shows at animation studios including Walt Disney Animation Studios, DreamWorks Animation Television, Disney Television Animation, and the Jim Henson Company. Teny graduated from the University of California, Berkeley, and the ArtCenter College of Design. She is based in Los Angeles.