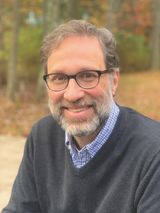 Jay Hosler is a biology professor by day and a scheming cartoonist by night. His diabolical plan is to weave his love of the natural world into thrilling tales of adventure. So far, the plan seems to be working. Unsuspecting readers fall into stories about creepy-crawly things and discovering the wondrous world right under their feet. His books have been translated into several languages, but he can only read the ones in English. In his spare time, Jay likes to read comics and watch Godzilla movies. He lives in Pennsylvania with his queen and two drones.