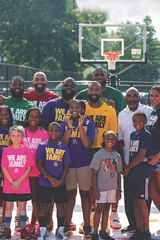 LeBron James is widely considered to be the best basketball player in the world and one of the greatest players of all time. James has won three NBA championships, two Olympic gold medals, and four league MVP titles. In 2017, Time magazine listed him as one of the 100 most influential people in the world. James grew up in Akron, Ohio, where he continues to create generational change through his LeBron James Family Foundation that focuses its efforts on helping youth achieve a better future through education. In 2018, his foundation opened the I PROMISE School, designed to help underprivileged students and their entire families succeed in school and beyond.