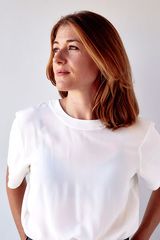 Ellie Eaton is a freelance writer whose work has appeared in the Guardian, the Observer, and Time Out. Former writer-in-residence at a men’s prison in the United Kingdom, she holds an M.A. in creative writing from Royal Holloway, University of London, and was awarded a Kerouac Project residency. Born and raised in England, Ellie now lives in Los Angeles with her family. The Divines is her first novel.