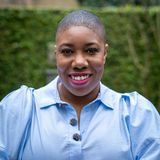 Symone Sanders is a senior advisor for former Vice President Joe Biden's 2020 presidential campaign. A juvenile justice advocate, she formerly served as chair of the Coalition of Juvenile Justice Emerging Leaders Committee and as a member of the Federal Advisory Committee on Juvenile Justice.  She is a former CNN political commentator and been a resident fellow at both Harvard University's Institute of Politics at the Kennedy School and the University of Southern California's Center for the Political Future. She lives in Washington, DC.