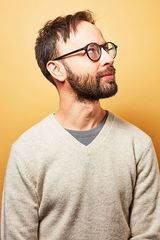 Jason Schreiber honed his craft at the French Culinary Institute in New York City, but his education began years earlier in the kitchen of his childhood home in suburban New Jersey, where he churned out baked goods of all shapes and sizes. After completing his studies, Jason worked alongside celebrity cake maker Ron Ben-Israel, who taught him the importance of precision and the value of camaraderie in a professional kitchen. After five years of creating jaw-dropping cakes with Ron and his team, Jason took the plunge into the cutthroat world of

New York City freelance food styling and recipe development. Within a week, his work was featured on the cover of Martha Stewart Weddings, and with that his new career was born. He continues to contribute regularly to Martha’s magazines, books, and television shows, and has expanded his clientele to others such as Food & Wine, Real Simple, and Delish (to name a few), as well as many nationally available household brands and products. Jason lives in Brooklyn, New York, and he doesn’t have a dog, yet.