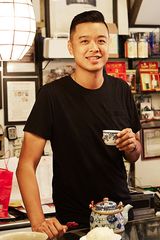 Wilson Tang is the owner and operator of Nom Wah Tea Parlor. Prior to taking over the business in 2010, he was a financial analyst for Morgan Stanley. Wilson has expanded the Nom Wah footprint to include Nom Wah Tea Parlor in Philadelphia and Nom Wah Nolita, a contemporary offshoot in New York City that opened in 2016. Wilson lives with his wife and two children, Ryan and Lucy, a few blocks away from Nom Wah Tea Parlor.