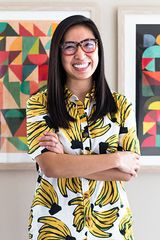 Lauren Ko is a writer, artist, self-taught home baker, and the founder of the popular Instagram account @lokokitchen. She has roots in sunny San Diego, but after wandering the world, she has settled in Seattle, WA, with her husband, Ben, and their bear dog, Santi. Lauren’s colorful geometric style regularly inspires fellow bakers on Instagram, where she has amassed nearly 300,000 followers. Her pie designs have been featured in publications such as Vogue, O Magazine, Buzzfeed's Tasty, The Seattle Times, The Washington Post, My Modern Met, and Design Milk. She has appeared on-screen in New Day Northwest and Martha Bakes. She was named to The Bake Feed’s 2018 Baker’s Dozen—13 of the most talented baking icons, movers and shakers pushing baking boundaries and making the biggest difference in the baking world.