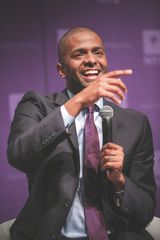 Bakari Sellers made history in 2006 when, at just twenty-two years old, he defeated a twenty-six-year incumbent State Representative to become the youngest member of the South Carolina state legislature and the youngest African American elected official in the nation. In 2014 he was the Democratic Nominee for Lieutenant Governor in the state of South Carolina. Sellers is a CNN political analyst and served in the South Carolina state legislature. Recently named to ’s 󈬘 Under 40” list, he is also a practicing attorney who fights to give a voice to the voiceless.