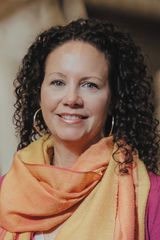 Laura Morelli holds a Ph.D. in art history from Yale University and has taught at the college level in the U.S. and in Italy. She is a TedEd educator and a columnist for National Geographic <i>Traveler </i> magazine. Her debut novel, <i>The Gondola Maker</i>, earned a starred review in Publishers Weekly as well as IPPY and Benjamin Franklin Awards. Her nonfiction travel guide series, including the popular book  <i>Made in Italy</i>, was originally published by Rizzoli / Universe.