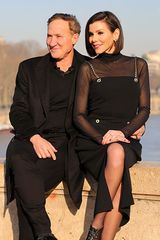 Heather Dubrow is an actress, television personality, author and host of the top-rated podcast, Heather Dubrow’s World. Heather and her husband, Dr. Terry Dubrow, have the #1 selling skin care and supplement line called Consult Beaute & Health sold exclusively on the SHOPHQ shopping channel. Heather and Terry live in California with their four children .

Dr. Terry Dubrow obtained degrees in medical sciences from Yale University in 1980 and the UCLA School of Medicine in 1986. He is certified by The American Board of Plastic Surgery and is also a certified expert for the California Medical Board. Dr. Dubrow has been showcased as the surgical expert on several television shows including Fox Network’s The Swan, E! Entertainment TV’s Bridalplasty, and since 2013, he has been the star of E!’s hit show, Botched. Born and raised in Los Angeles, he lives in California.