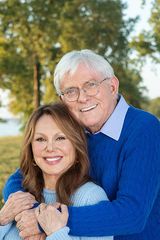 Marlo Thomas is an award-winning actress, author, and activist whose body of work continues to impact American entertainment and culture. She has been honored with four Emmy Awards, the George Foster Peabody Award, a Golden Globe, a Grammy, and has been inducted into the Broadcasting Hall of Fame. In November 2014, President Barack Obama awarded Marlo the Presidential Medal of Freedom, the highest honor a civilian can receive.